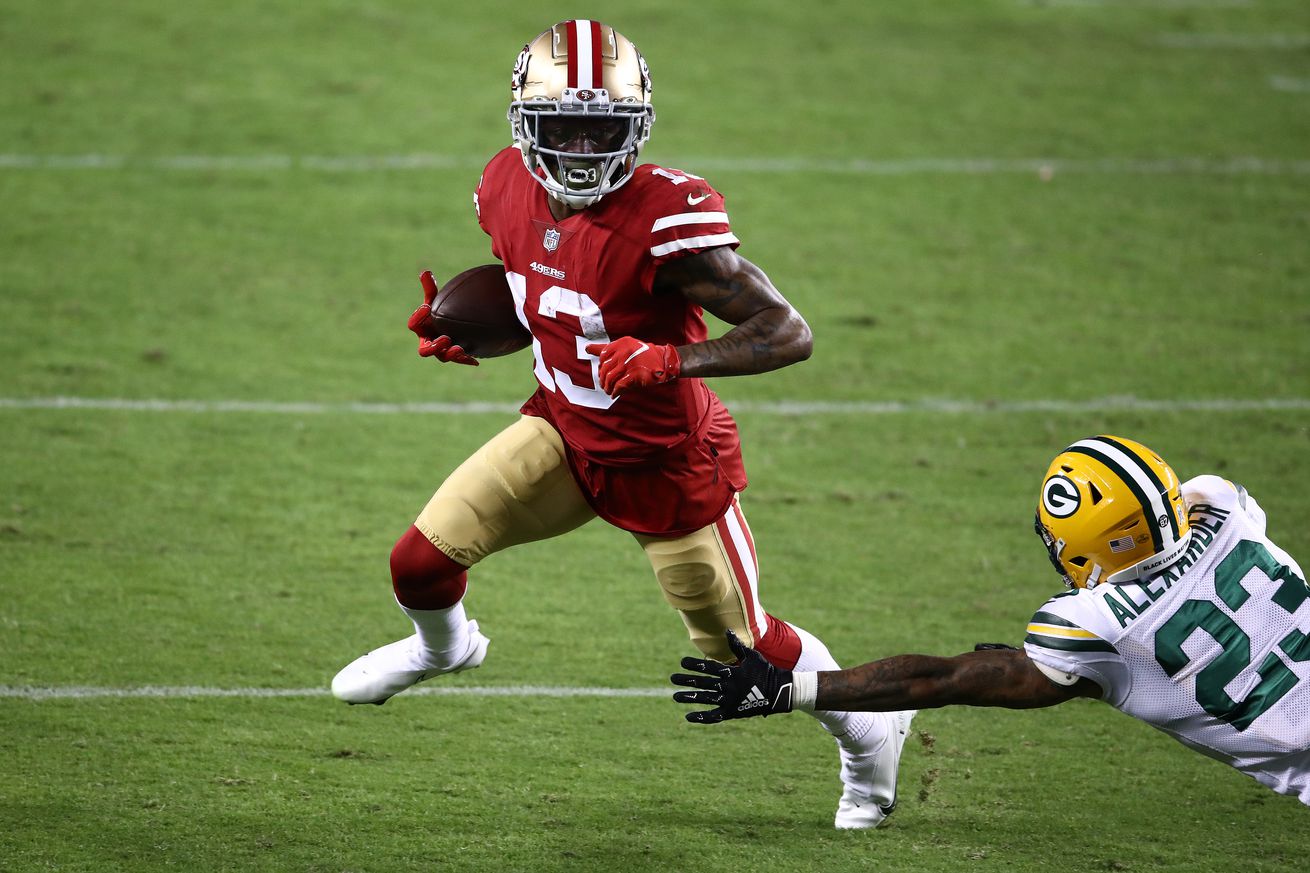 The 49ers HC spoke to the media Friday morning

San Francisco 49ers head coach Kyle Shanahan seemed happy to get out of Thursday night’s game relatively healthy. He spoke about some of the team’s injuries, how he felt the offensive line performed, and much more.

Obviously, with the news that no positive tests come back, including WR Kendrick Bourne being negative. What’s your level of frustration and how disappointing is it that, A, all those guys were absent from the game last night and, B, the league didn’t think about moving the game back to enable you guys to have a chance to suit up all your players?

“I dealt with the disappointment yesterday. Finding out that it was negative today, I was glad for Kendrick and those guys. They don’t have to worry about at least being sick right now. We dealt with that yesterday. Part of this protocol, it’s part of everything. I know it’s frustrating, but it is what it is. That’s what everyone in this world’s got to deal with right now. They’re doing that for the safety. Unfortunately, it wasn’t necessary, but I get why it did happen. So, got to deal with it and we obviously dealt with that last night. So, hopefully it won’t happen going forward.”

Your understanding is that all those guys who were on the COVID reserve list are now off the list? I know you’re not going to have anything at that facility today, but those guys would be allowed to come in if they wanted to?

You had mentioned WR Deebo Samuel possibly coming back for this game against New Orleans. Are there other possibilities for that game? RB Raheem Mostert, OL Ben Garland, I think are eligible. Where do things stand with them?

“Yeah, I don’t think, Ben doesn’t have a chance this week. I do think Raheem and Deebo do. That’s not for sure. I’m hoping for it and I know they’ve got a chance, but we’ll get a good look at them on Monday and hopefully we can get them in limited for Wednesday. So, just Deebo and Raheem with the injury stuff. Obviously, excited to get [WR Brandon] Aiyuk and Bourne and [T] Trent Williams back.”

Are you guys going to be signing former Washington Football Team QB Josh Johnson for quarterback depth next week? Is that going to just be onto the practice squad?

“Yeah. I don’t think it’s official yet. He’s got to go through all the COVID stuff, but yeah, that is our plan to get him on our practice squad. Hopefully, I think, get him out to Wednesday practice would be the earliest we can.”

Do you have any sort of history or past connections with Josh or how was he on your radar? I know obviously he’s been in the league for quite some time.

“Yeah, no, I don’t. I definitely wanted someone and the situation around that just had experience. Someone who’s going to be on the practice squad, not get a lot of reps, but if something happened like what happened yesterday, where you just randomly lose a bunch of guys that you kind of plan for. With [QB] Jimmy [Garoppolo] not being available, we need three guys available, especially with the COVID type protocols and stuff. So, I wanted a guy who’s done it before, been in the league. I’ve got a number of close friends in the league who have been with Josh and heard great things about him. I’m excited to get him in our building.”

In terms of the starting quarterback job, is that firmly QB Nick Mullens for the time being or are you going to be pretty fluid with that?

“No. It’s firmly Nick. As I’ve always kind of said, I feel real good with Nick and [QB] C.J. [Beathard]. They’re always pretty neck and neck for me, but I’m not going to just bounce them back and forth. So, something would have to happen to make a change. Nick wasn’t the reason that that happened last night. That’s why he’ll get the first opportunity versus New Orleans.”

Has there been any resolution or any decision on whether Jimmy Garoppolo will require surgery?

Pittsburgh Steelers WR Chase Claypool in some interview talked about a friend of his who is on the team here and there seemed to be some discontent, at least the way that that Claypool revealed it or relayed it on how you guys practice in pads on Thursdays and maybe that doesn’t give you guys an opportunity to stay fresh. I just wondered if you have any response to that thought process?

“I mean, the third party from another team, I wouldn’t really get much into, but yeah, I don’t mind talking about that. Some people practice with pads on Wednesdays. Some people do on Thursdays. I believe guys are too sore on Wednesdays, not recovered from the game. I don’t even keep the pads on for all Thursday. So, we keep them on for the first two periods of practice, a pass protection period and a run period. So, I feel pretty good about that. I think we do it as little as anyone in the NFL.”

How did TE Jordan Reed emerge from this game?

“Good. I was excited to get him out healthy. No matter what happened, we lost a number of guys before the game and it was extremely tempting to use Jordan Reed more because of how good of a player he is, but he hadn’t practiced in like six weeks since the New York game. He just got cleared to go this week. And for a guy to just get cleared to go this week, who has an injury history, he’s coming off an injury and to only to give him two walkthroughs would have been pretty unfair to him. So, I was glad that he just was available for what he was and did a real good job when he was in there. But, I want to make sure we do whatever we can to keep him here for the long haul, the rest of this year, especially with losing [TE] George [Kittle].”

Now that you’ve looked at the film, how did your guys come in that replaced other players?

“I think those guys under the circumstances, they all came in and they competed extremely hard. Obviously, [OL Justin] Skule had the biggest challenge going against a real good player and he definitely, he got him a couple of times, which stick out. Besides those times that stuck out, I thought he did a good job, but under the circumstances, I was proud of all those guys who stepped in and competed.”

How much confidence do you have in WR Richie James to step in and maybe take on a more expanded number four role when everybody’s healthy?

“The same as I did before the game. I’ve always had a lot of confidence in Richie. That’s why he was one of the four receivers who dressed for the Super Bowl. Richie had some bad luck with injuries this year. If he would have been healthy in training camp with Deebo being down and Aiyuk being down, he would’ve started Week 1. He’s had some bad luck with injuries too. He just came back that week and then re-injured it then, pulled his hamstring in the game. He was out another month. Then he was just coming back from an ankle after last game. So, we’ve got a lot of confidence in Richie. I thought he was, I kind of expected him to do what he did because he is that type of player. I was just glad he was able to make it through the game because I know he was coming off an injury too.”

How has OL Colton McKivitz progressed and how did he do in his limited action last night?

“I thought it was a good first game for Colton. He had never played an NFL game, considering we didn’t have preseason and stuff like that. So, to get out there, we didn’t want to put all the pressure on him. With moving [OL Daniel] Brunskill to center, who I thought did a real good job, too, at center. We got [OL Tom] Compton in there and Colton and they both rotated throughout the game and we thought both of them did a good job. Thought we were solid.”

Do you believe Daniel Brunskill has a future at center?

“I’ll answer the Brunskill one first. Yeah, I mean, Brunskill’s played every single position for us in the year and a half we’ve had him, at tackle, guard and center. So, the more versatile you are, it’s a lot easier to stick around in this league, which makes him valuable. I think he’s also played at starter level for us at a number of positions too.”

Given all the injuries stuff you guys have dealt with, I know a lot of it is luck, but you’ve also had guys have setbacks in their recovery. A couple of years ago, you did make a change with the training staff. I’m wondering if you guys are going to look into the way the training and performance has handled all of these things or if you’re content with what they’re doing and just sort of chalking the injury issues up to luck?

“Well, the strength and conditioning staff goes through that throughout an offseason. So, it’s hard to evaluate how they’re doing in Zoom workouts throughout the offseason. So, I’m not putting much on them for that. This is the situation the whole league is dealing with. I know we have it worse than others, but you don’t go through an entire offseason and you go through a two-week training camp. That’s, I think, what anyone using common sense should expect.”

Despite Bourne’s negative tests, the league or union is still looking into possible COVID violations regarding Kendrick and the organization in regards to mask wearing and making sure you’re not hanging out with everyone at all times. Do you know anything about that? And do you expect there to be any violations to come out of that?

“No, I don’t expect any to. I think when anything comes up and they think people have COVID even though it’s negative, they’re going to look into it hard. And I’m glad for that. I think we’re doing what we think is as good as we can and when they look into it, I’m sure they’ll find ways we can improve. Whatever they tell us on how we can improve, we will. We’ve got a guy sitting out of every single meeting, passing out disposable masks. Anyone who doesn’t have one or doesn’t have it on, we’re doing that non-stop. We’ve got trackers on all the time. We’re making sure guys have them. We don’t frisk the guys, so we don’t know if they have them in their pockets or not, but we make sure that we’re handing them out and they’re using them. I think we’re doing a very good job. I’m always interested and want to know how we can do better.”

A few weeks ago, you said that RB Jerick McKinnon was kind of dealing with tired legs. Did you see some improvement with him over the last week or two that you felt like you can lean on him?

“Yeah. I think Jet’s been good these last two weeks. I think it helped him when we did take down the workload, especially letting him recover from the over workload.”