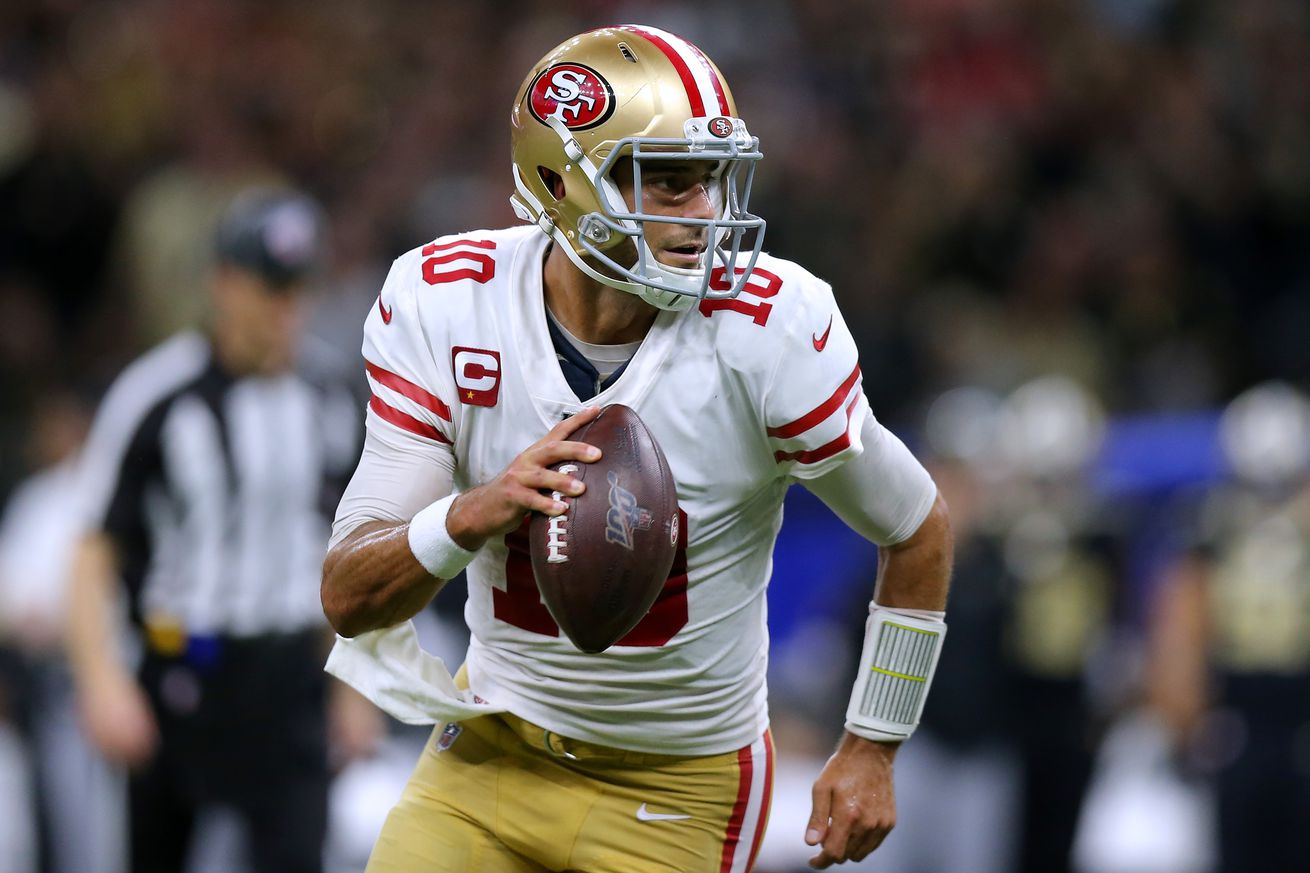 Not just statistically, but when you factor in the stakes and the opponent, Jimmy came through when the 49ers needed him the most on three different occasions

Sunday’s performance against the New Orleans Saints was the best game Jimmy Garoppolo played as a San Francisco 49er. Garoppolo’s numbers were gaudy, but it goes well beyond the box score. Unsurprisingly, there are still a handful of media members “moving the goalposts” when discussing Jimmy G. That’s always going to be the case, and there’s no reason to spend any time on that.

This is about a team asking a quarterback to save the day, something the 49ers haven’t asked Garoppolo to do all season. In this case, New Orleans entered Week 14 with the fifth-best passing defense in the NFL. The Saints also came into the game, getting more pressure on the quarterback than any other team in the league at 37%. Knowing the quarterback on the other side, Garoppolo would have to bring his A-game if the Niners were going to win this one.

It’s easy to get caught up in the final plays of the game and forget everything else that happened in the other 60 or so plays. Jimmy G wasn’t just good at the end of the game. He made plays at the beginning, in the middle when the 49ers were down, and at the end when they needed him most. Let’s start with the first drive.

The Saints made a statement to open the game by marching 73 yards on nine plays for a touchdown. With the way that drives went, it didn’t appear that the 49ers would slow down Drew Brees in the afternoon. Kyle Shanahan’s early aggressive approach signaled that he had trust in Garoppolo, and Jimmy came through. On the first drive, Garoppolo was 4-5 for 81 yards and a touchdown. That set the table for how the afternoon would go, but placement on these throws was as good as it gets.

The second throw on the drive to Emmanuel Sanders was one of Jimmy’s best all season, in my opinion. I know the stakes weren’t high, but there was no margin for error.

When you hear people talk about fitting a ball into a window, that’s what they mean. The lone incompletion on the drive went through Deebo Samuel’s hands. The touchdown toss to Kendrick Bourne was what the kids call a dime. The cornerback loses his footing, and that gives Bourne the separation he needs, even if for a split-second. Garoppolo throws it high, so only Bourne can make a play on the pass.

It doesn’t seem like much, but this type of accuracy is why Shanahan is comfortable throwing it in short-yardage situations and around the red zone. Garoppolo puts the ball where it needs to be.

The offense trotted back onto the field with the score 27-21 with just over four minutes to play. The 49ers couldn’t afford to give the ball back to New Orleans, but they also needed to put points on the board. Garoppolo leads the offense on a nine-play, 80-yard drive to give the 49ers the lead. They left:42 seconds on the clock for the Saints. For as hard as we’ ve(I) been on Shanahan and his clock management, the drive to end the half was as well-coached as it gets. It’s nice to see the team avoiding the same mistakes on a weekly basis.

It’s 3rd & 10 with 2:57 to go in the second quarter. If you don’t convert this you give Brees the ball back with three timeouts and the two-minute warning. The probability of New Orleans scoring was high. Jimmy finds Kittle, who stiff arms a Saints linebacker and 20 yards later, has a first down. The only other throw on the drive-by Garoppolo was a seven-yard slant to Samuel, but the 49ers getting points and keeping Brees off the field went a long way in them winning the game. You don’t want to come out of halftime, feeling like you need to score “or else.”

The 49ers have the best “four-minute” offense in the NFL. I don’t have any stats to back that up, but it feels like when the offense is closing games out, they do whatever they want to do. In the fourth quarter, San Francisco scored in two different ways. They bled the clock on the first possession on an 11-play 52-yard drive that took off just under four minutes off the clock. If you recall, the sack on second down all but ended the drive. Sure, you could have run it there, but the way the 49ers were throwing it, it’s tough to fault Shanahan. The Saints had a good blitz on. It happens.

The Niners had :53 seconds to get into Robbie Gould’s field goal range to win the game. The first throw went to Kittle for eight yards. Saints defenders contested the next throws, and that took us to 4th & 2. If the 49ers dropped this game, it felt like they could kiss a first-round bye goodbye. Kittle shook free, avoided the initial tackle, and made like the scene from the Little Giants when Spike was carrying all those kids on his back.

Garoppolo’s composure through all of this was impressive. There was a play or two where Jimmy was frantic and let the pressure get the best of him, but overall, he was as good as it gets on Sunday. From poise in the pocket to where the ball was placed, Garoppolo had the look of a guy that had been in a playoff atmosphere before.

Jimmy is here to stay

What we’ve seen lately is Garoppolo taking the next step in his development. Shanahan is taking the kid gloves off and letting Jimmy G throw it all over the place. Garoppolo has proven, albeit a seven-game sample size, that he’s more than capable of carrying this team if need be. The most frustrating part for me watching Garoppolo all season is that it’s evident he has another level in him. It was just a matter of the quarterback being able to unlock that level. Since Week 8, the 49ers QB leads the NFL in touchdowns and his third in yards. Garoppolo is top-five in yards per attempt, passer rating, and throws that have gone for first downs as well. Across the board, he’s pretty much top-5 in each statistical category.

When Garoppolo plays at a high level, San Francisco is nearly impossible to beat. Garoppolo showed Sunday that he could bail out the defense. The 49ers needed this game from their franchise quarterback, and will likely need to rely on him when matters most. After Sunday, there’s no reason to believe Garoppolo will let them down.