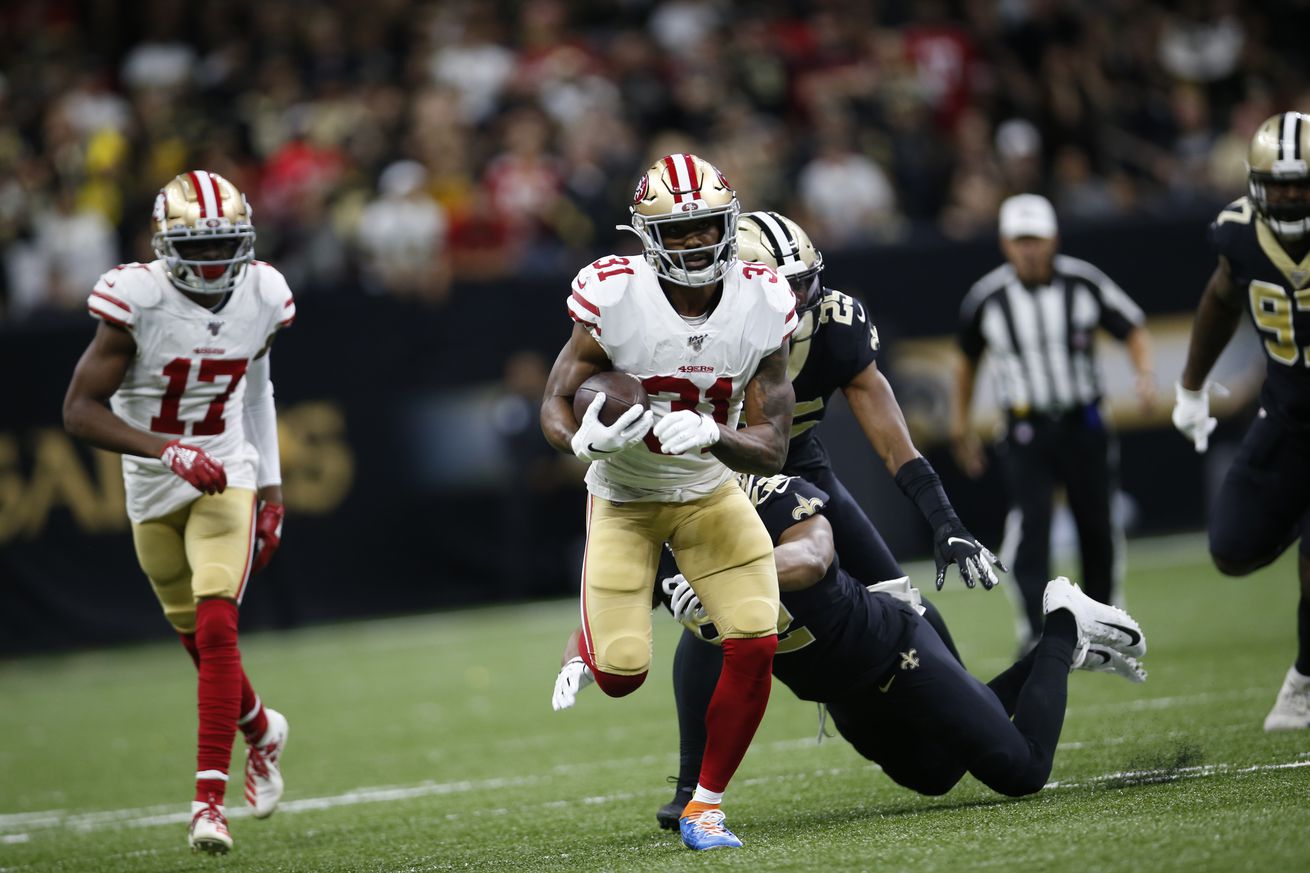 On New Years Day, the NFL Network was airing the top five games of the NFL’s regular season. Four of those games involved the San Francisco 49ers. Both games against the Seahawks and the Ravens and Saints games as well. With all of us expecting a deep postseason run for the Niners, we won’t have time to reminisce on the crazy season that was. The 49ers had been in some close games earlier in the season. While the score may not reflect it, Week 1 came down to the wire, but a pick-six from Ahkello Witherspoon on Tampa Bay’s game-tying drive put the game out of reach. Dante Pettis saved the day to help San Francisco overcome the Steelers. The 49ers are in the playoffs, and the likelihood either of those two sees the field is slim.

Towards the middle of the season, San Francisco went from the most dominant team in the NFL to the most exciting team in the league. The 49ers became must-see TV every week. Think about it the games San Francisco played from Week 9 on.

The 49ers came into Week 10 as double-digit favorites. This Thursday Night Football game was supposed to be a breeze, and by the way, the game started, it was shaping to be just that. After a quick score by the Cardinals, the 49ers scored the next three touchdowns and went into halftime up 21-7. San Francisco took a 28-14 lead into the fourth quarter. In the second half, the 49ers offense only scored on one drive. Who scored the lone touchdown of the half? Dante Pettis, who else?

Of their five possessions in the half, the final one was the most important. Arizona had just scored in 35 seconds to make it 28-25 with just under five minutes to go. If the defense got another stop, they had all the momentum to drive down the field and score.

A 3rd & 11 conversions to Emmanuel Sanders. A third-down run by Tevin Coleman, as he dove for a first. A 3rd & 9 throw to Ross Dwelley–after a Sanders false start–was a preview of what was to come by Jimmy Garoppolo for the rest of the season.

The 7-2 Seahawks came into Santa Clara to face the undefeated 49ers. Even without their best player, the Niners got out to a 10-0 lead against their heated rival. It looked as San Francisco would cruise to a victory and continue with their undefeated season. Then injuries to Weston Richburg and Emmanuel Sanders turned the game around in a way that’s still tough to believe how it all turned out.

A series after Richburg left, a sack-fumble gave Seattle life, and points on the board. The Seahawks scored the next 21 points and would have had another touchdown had it not been for a miraculous forced fumble by Jaquiski Tartt. That type of effort is what made this team the most exciting to watch in the league. Spectacular became routine. Expected, even. San Francisco’s offense went nine possessions without scoring a touchdown. They turned it over four times during those nine possessions. The 49ers had no business being in the game. Still, a 12-yard fumble recovery from DeForest Buckner, a two-point conversion from Kendrick Bourne, and a pair of field goals by Chase McLaughlin allowed the 49ers to stage a comeback of their own to send the game to overtime.

Seattle drove the field with little resistance on the first possession of overtime. The question wasn’t if they would score but when they would score. Then, Dre Greenlaw makes an interception to keep the 49er’s hopes alive. An incredible read by the rookie that would be overshadowed later in the year. Greenlaw returned the ball to Seattle’s 49-yard line. Seven plays and 20 yards later, McLaughlin has a chance to win it from 47-yards out again. The kicker shanked it wide left, and the 49ers squandered the perfect opportunity. After both teams traded punts, a 42-yard field goal gave San Francisco its first loss of the season.

The 49ers won their next two games and scored more than 30 points in each contest. Heading into Baltimore, it felt like these were the two best teams in the NFL. After the game, the media was all over, saying this had the feels of a Super Bowl preview. Despite the conditions, it was a relatively clean game. Both teams combined for two turnovers and nine penalties. It had a playoff-feel, as there were few possessions and even fewer trips to the red zone. The weather impacted the number of big plays we’d see in a non-monsoon setting, but the execution in this game was great on both sides.

There were more fourth-down attempts in this game than red-zone trips. This was the game where Shanahan received criticism for his decision-making toward the end of the first half and throwing the ball on 4th & 1. A defensive lineman batted the fourth-down pass. The 49ers offense had run the ball five straight times before that pass and had plenty of success all game on the ground. On the final possession of the first half, Shanahan elected to play keep away as opposed to being the aggressor. Settling for a 51-yard field goal in those elements was asking for it, and Robbie Gould’s kick would end up blocked.

The score was tied at 17 when the Niners didn’t convert on fourth down in the fourth quarter. That would be the last time they touched the ball, as Lamar Jackson made a couple of key conversions to put Baltimore in field goal range to win it 20-17.

Two things I was sure of heading into the 49ers second road game in a row. They were going to beat the Saints in this spot, and both defenses would show up, and this would be a low-scoring game. One of these things was true. There were eight touchdowns in the first half. This was the two best play-callers in the NFL going deep into their bag of tricks. It was the epitome of “anything you can do; I can do better.”

This game was always going to come down to who would get the last stop. There were five possessions in the fourth quarter, and each one ended in a score. The Saints scored on their last possession in one minute and 30 seconds, and that did the 49ers a favor. Jimmy Garoppolo hit George Kittle on a short route, and Kittle ran through the city of New Orleans to put the 49ers into field goal position, and eventually win one of the wildest games in recent memory, 48-46. If Baltimore’s game was what we’ve come to expect from a level of execution from playoff level teams on defense, the 49ers road game against the Saints was four quarters of euphoria.

Which game was the best?

We don’t need to recap Week 17, as it’s fresh in our mind. The two games before were equally exciting. The 49ers didn’t beat the Falcons. They did blow a nine-point lead and forget to cover Julio Jones. Despite being nine-point favorites, many fans felt like this would be a letdown spot for San Francisco. This game proved that even the best team in the conference couldn’t turn it over, settle for field goals, or not convert on third and expect to win.

Week 16 was peak 2019 49ers. Jared Goff looked like the best quarterback in the NFL on a few throws, and like Jared Goff on a few others. Explosive plays were the name of the game for the offense, as was their efficiency. Jimmy G made a few poor throws that cost the team but led the team back from a 21-10 deficit.

San Francisco has had you on the edge of your seat since Halloween. This team will have you frustrated, in disbelief, and laughing—sometimes simultaneously. I mentioned the effort. Guys like Kittle, Nick Bosa, Buckner, the list goes on and on. They don’t cheat themselves. When your best players bring it from the first snap to the last, it trickles down to the rest of the team. What makes the 49ers the most exciting team in the NFL is the unknown. Whether that’s Greenlaw making a game-winning tackle by an inch, or Bourne making a third and long catch in traffic to keep a two-minute drive alive. It’s impossible to look away, and that’s why this team is a must-watch.

Which game was your favorite from Halloween on?