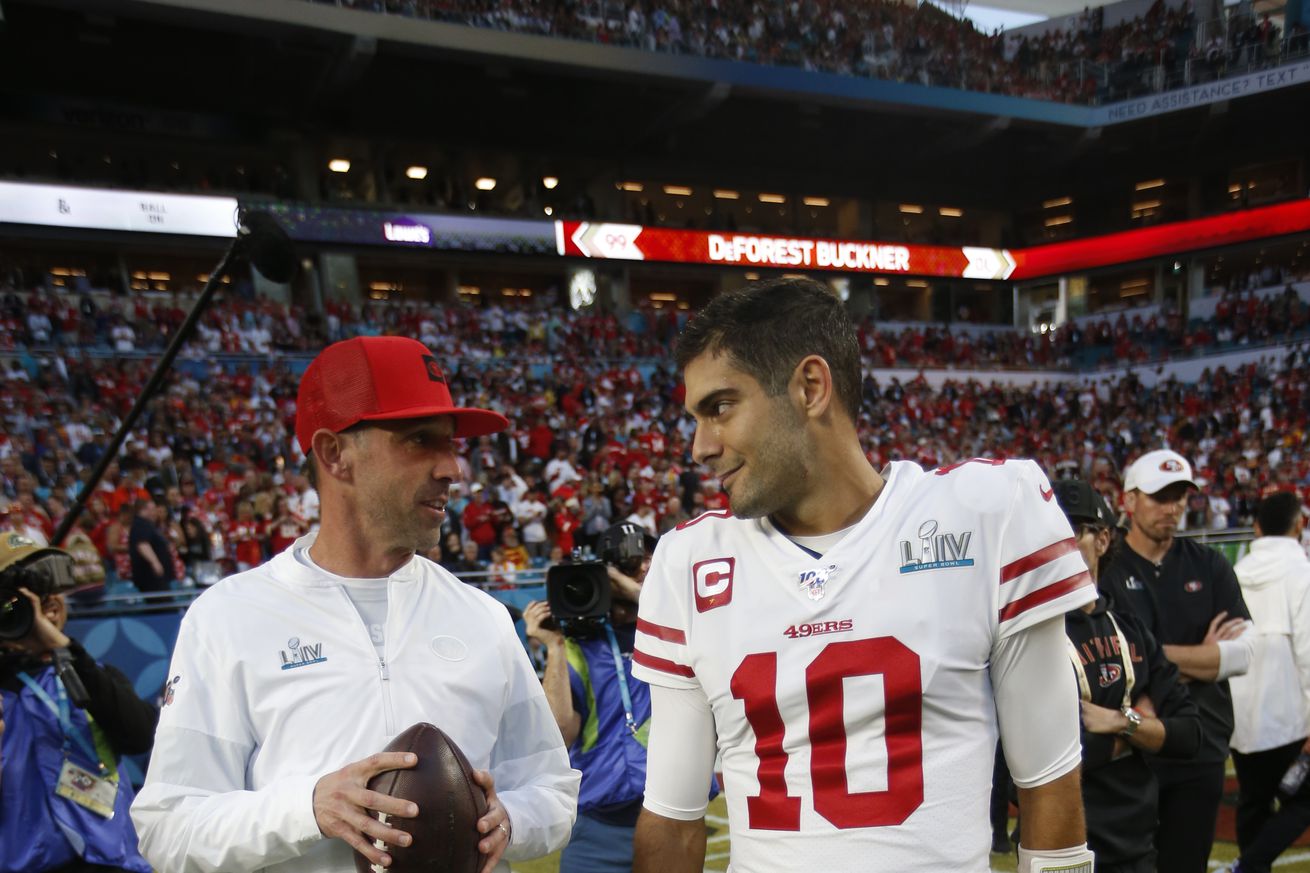 A guest post that digs through Kyle Shanahan’s history, with a comparison to Andy Reid. The story comes together when

This story is brought to you by @MabSidam on Twitter, a Freelance writer that put together a fascinating article, as you’ll see below.

To first understand his generation’s current greatest offensive mind and his confusing QB predicament, it is necessary to frame him against the last one in Andy Reid. Reid, the greatest offensive mind of his generation, was 46 years old when he lost his first Super Bowl, his starting Quarterback Donovan McNabb was 28 years old, under the schematic genius of Reid in 2004, McNabb posted the only 100+ Passer Rating season of his career(104.7), McNabb was always a good QB, but for that one season he was great, the Eagles and Coach Reid, however, lost the Super Bowl to a consistently great QB Tom Brady who has six seasons posting a Passer Rating over 100+. Andy Reid did not know it at the time, but he was five years into a search that wouldn’t end for 12 more years.

Kyle Shanahan lost his second Super Bowl at 40, he lost to a coach reaching the end of a long and tearful journey he is sadly still on. The graph below tracks his journey.

12 years in and Shanahan has only ever experienced tremendous execution from a QB once four years ago…….actually he had another 6 game spell that he can’t seem to move past despite a larger sample size indicating that was most probably a fluke.

The above graph tracks this season’s QB performances and has a clear top end game manager cluster between 6-8 Sacks and 60 to low 70s QBR. The group includes Rivers, Goff, Brady, Roethlisberger, and Jimmy G. Immediately above them past 70 is Brees, the best game manager of the group who has played in that offense for 14 years now and Carr, who’s having a great season. Mahomes and Rodgers both play for West Coast play-callers, and I can respect Reid outperforming Shanahan to this degree but Lafluer? That’s Hall Of Fame QB play elevating a good coach over a great one. Shanahan is in a difficult spot; he knows the pits of below-average QB play from the likes of Hoyer and Grossman, but he also experienced better QB play than what Garoppolo is currently giving him. In this limbo, they are only two options.

Option 1 – Ride The Course And Hope

While it’s different times, it’s worth pointing out Brees’ first elite-level season came in his 4th season under Sean Payton after slight regressions in his 2nd and 3rd. Brees’ own work ethic and Payton learning his QB and curating the playbook to Brees skill set has led to a fruitful partnership that resulted in a Super Bowl in Brees’ first elite season. Brees elite seasons came when he was sacked 20 times or less Garoppolo in 2017 was going to settle around the low 20s in sacks if he played a full 16 game season. If you’re going to ride the course, might as well make it as optimal for Jimmy as possible, Garoppolo has only played one full season in this system and at 28 definitely has time on his side. The downside to this is Brees is a savant at playing QB. Drew Brees is a machine that churns out yardage spreading the ball out to anyone who happens to be open. Are we sure Garoppolo can make it work with anyone? There is hard work, and then there is mastering his position before his contract expires.

Option 2 – Go Forward With What You Know

Unlike Andy Reid for most of the late 2000s, I believe Shanahan shouldn’t waste any more time pulling great out of good and just go out and get his guy even if it means suffering through a few Michael Vicks and Kyle Orton’s. McDaniels, who has been around just as long as Shanahan left his guy, experienced QB purgatory and went immediately back to his guy. The experience must have deeply scarred McDaniels as he would not leave New England despite generating great interest around the league. Matt Ryan’s best season would be around Brady 16, who happened to pull off the greatest comeback ever in 2016, denying another generational offensive mind their first Super Bowl. Matt Ryan is seemingly available and actually has a reliable sample size to suggest elite play in this system. Even in that mess that is the 1 – 5 Falcons, Ryan is performing well.

The Long Journey – The Guy

Ryan is my first choice, but he is also a risk at 35 and not quite being in that Wilson-Jackson elite bracket anymore. A reunion with Shanahan, in theory, should give him that bump, but it could also flame out like Phillip Rivers in Indy. I could be wrong, and Garoppolo makes the elite jump over the next 2 to 3 years, or he could just be Shanahan’s McNabb, usually just good and only occasionally great when the coach has his fastball. Andy Reid was there for Favre’s beginning and played a major part in all that early success. It was only two decades later that he got his own Favre level QB. I’m pretty sure Shanahan saw John Elway run the previous iteration of this offense to perfection on his last legs. After seeing that, how can you accept players in their prime running a “good to very good” version of it?

My favorite trend on all the graphs is how sharp offensive minds on this level stick to bad QB play. They’ll only ever do a season, and nothing more and always find their way back to elite status. Garoppolo may be the guy, or maybe he’s just another QB Shanahan will ditch when his play drops. Andy Reid was 60 when he finally saw his offense run perfectly. Sadly, he had left the team where he made a name for himself due to mediocre QB play affecting his record and is currently making up for the lost time he spent turning average starters into pro bowlers. Hopefully, Shanahan makes it work here. The frustrating thing with Garoppolo is the reverse of the burden carrying that has happened in the last two years. Jimmy G carried a way less talented team to a strong 5 – 0 record to close out 2017. Brian Hoyer was posting a 32.6 QBR before that for Garoppolo to come in and nearly triple that score must have been manna from heaven moment for Shanahan. Garoppolo sadly tore his ACL a year later and has never really been that guy again. ACL injuries usually take about two years to recover. I’ll admit patience is needed, but this squad is in full win-now mode, and his huge contract made them move off some defensive pieces they loved but couldn’t afford. He has to justify those decisions, and he just has not been able to.

Mahomes might post 5 or 6 100+ Passer Rating seasons. Can Garoppolo do that? If not, can he provide at least 4 or 5 truly elite seasons that give them a Super Bowl chance like Brees? If not even that, can he be at the very least as clutch as early career game manager Tom Brady? As his contract becomes easier to get out of, Garoppolo has to cement himself as Kyle Shanahan’s guy, or he’ll be moved and just end up another name crossed out on a long journey.

All stats from; Pro Football Reference.