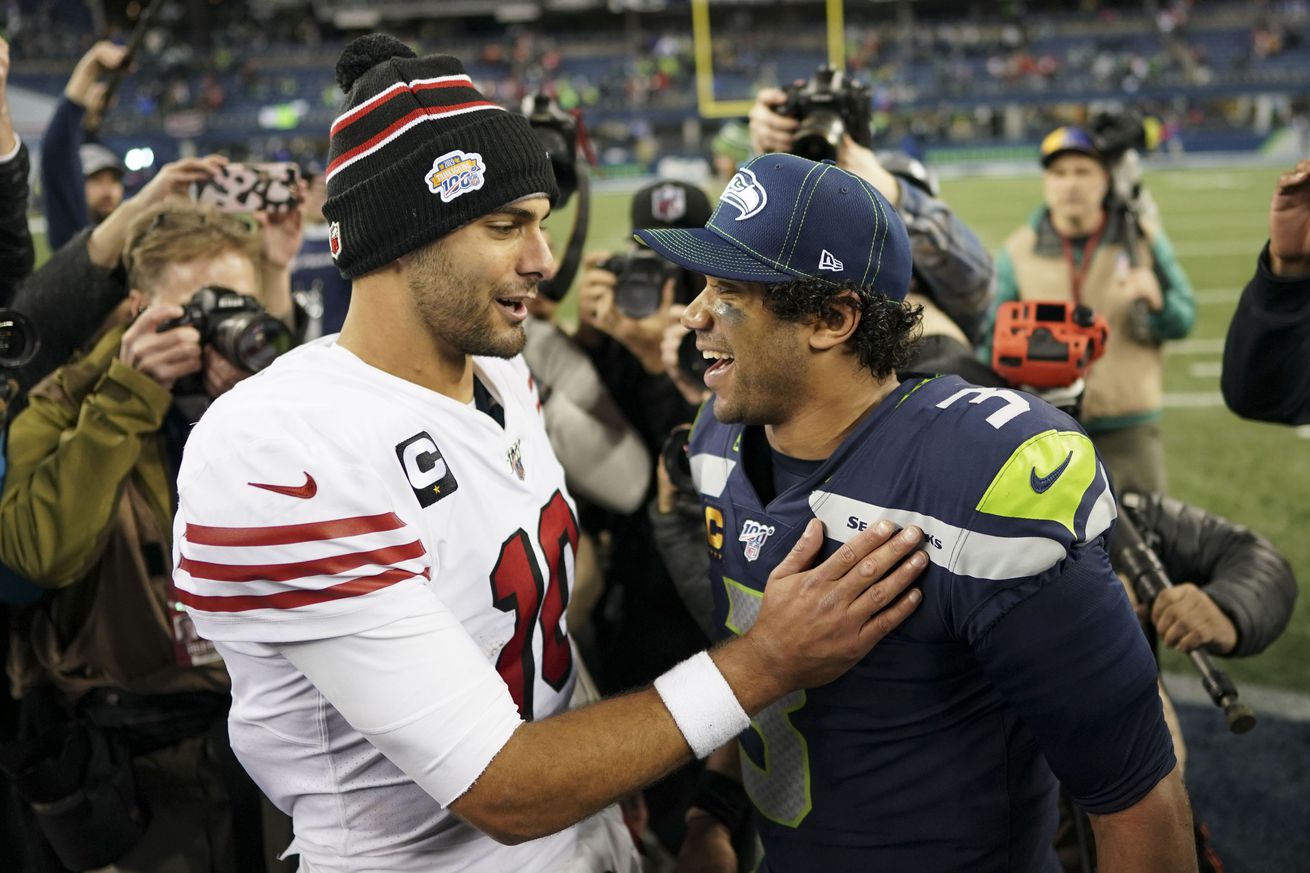 Vikings, Eagles, or Seahawks? Which team will San Francisco want to face in the opening round of the playoffs?

After punching their ticket into the postseason dance, Kyle Shanahan’s 49ers will be watching closely on Sunday, as their divisional round opponent will be determined. While most coaches and players will never admit it on record, I’m certain that they are hoping they get to face off against a particular team to increase their chances of advancing in the playoffs — the primary objective.

Since San Francisco clinched the No. 1 overall seed as a result of a head-to-head tiebreaker with the Green Bay Packers, they will face the lowest seed remaining at Levi’s Stadium on Saturday, January 18. Regardless of the opponent, the 49ers will have the advantage of rest, health, and an awfully short commute from their homes to the stadium.

The three teams that the 49ers can face when they host the first-ever playoff game at Levi’s Stadium are the Minnesota Vikings, Philadelphia Eagles, or Seattle Seahawks (for a third time!).

This Sunday, the Vikings will head to the Super Dome to take on Drew Brees and the Saints, while Russell Wilson and the Seahawks will travel cross-country to duel against the Eagles.

Since the Saints-Vikings’ game is in the morning, if the Vikings were to win that matchup, they would head to Santa Clara, no matter what happens in the afternoon game. If the Saints win in the morning, the winner of the Eagles-Seahawks’ game will come to the Bay Area to face off against the 49ers.

Before those games kick-off, here is the team that the 49ers will secretly rooting for this weekend. I will order the three possible foes in order from “bring them on!” to “Uh oh, this will be a challenge.”

This Eagles’ season has been an indictment on the high-level operation that general manager Howie Roseman, head coach Doug Pederson, and quarterback Carson Wentz run in Philadelphia. Despite the falling to a 5-7 start and succumbing to injuries all over the roster, the 2017 Super Bowl Champions rattled off four straight victories and won the NFC East.

But January football is a game of attrition — the healthiest teams usually advance and represent their conference in February’s biggest game. And that’s the one area where Philadelphia seems to be hurting — no pun intended — the most.

The Eagles have been dropping like flies, as Wentz has lost wideouts DeSean Jackson and Alshon Jeffery for the season. Starting receiver Nelson Agholor, star tight end Zach Ertz and running back Miles Sanders are all questionable for the wild-card game vs. Seahawks.

Upfront, breakout guard Brandon Brooks was placed on injured reserve this past week, and star tackle Lane Johnson is questionable for this weekend’s contest. Defensively, they’re facing injuries all over the field, including starting corner Ronald Darby, who’s out for the season.

Per Football Outsiders’ DVOA, the Eagles finished 15th in total defense, 16th in passing defense and fourth in rushing defense. Just based on DVOA profile, they’re identical to the New Orleans Saints — who the 49ers hung 48 points on earlier this season.

Despite having good defensive line talent, the Eagles are 12th in sack percentage and 19th in opponents’ passer rating. If the 49ers can protect quarterback Jimmy Garoppolo, he will slice and dice up the defense.

Offensively, the Eagles finished 14th in total offense, 17th in passing offense, and 10th in rushing offense. They have one of the more talented playmakers in the NFL in Carson Wentz, who’s elevated an underwhelming roster to the postseason. Yet, he’s missing a majority of his weapons and is working with guys that did not even start the season with the Eagles.

Over the last three games, Wentz has only been sacked on 3.2 percent of dropbacks — but the offensive line has lost Brooks, and the 49ers will get pass rusher Dee Ford back as well, which doesn’t bode well for Philadelphia.

While the Eagles have a talented head coach and quarterback combination, their overall team does not have the depth to compete with a 49ers team that will be the healthiest it has been since early in the season.

On paper, the Vikings seem to be a tough opponent — with a sound running game led by Dalvin Cook and a Mike Zimmer-coached defense that will always rise to the challenge. But it all comes back to one thing in the playoffs — the quarterback.

As long as the Vikings have Kirk Cousins under center, I have a hard time believing that Minnesota will be winning road playoff games in January. Cousins is 0-1 in the playoffs, with his one start coming against the Packers during his tenure with the Redskins. After this season, Cousins’ record on prime-time games is 7-15, including two, late-season losses at Seattle and vs. Green Bay.

With the NFC North Division on the line vs. Packers, Cousins had his best disappearing act — finishing 16-of-31, 122 yards, one touchdown, and one interception. In big spots, I cannot trust Cousins to deliver and put his team over the hump.

Though, if the Vikings are to play the 49ers, that means Cousins would have beaten Brees in the Super Dome, and that would be quite an impressive accomplishment.

Despite Cousins’ flaws, the reason that I did not have the Vikings at No. 1 is because of Cook’s rushing attack, a deadly play-action passing game, and a disciplined defense. The Vikings were sixth in the NFL with 133 rushing yards per game, and the 49ers are vulnerable in the middle since the loss of lineman D.J. Jones. It is an area that Minnesota could exploit and take advantage of.

Defensively, the Vikings are the fourth-ranked unit, per DVOA, and they have been equally solid stopping the run, as they have been deterring the pass. Their defensive line led by Danielle Hunter and Everson Griffin has consistently given opposing offenses fits, and there’s not an obvious weak point in Zimmer’s group.

The Vikings have playmakers all over the field, including wideouts Stefon Diggs and Adam Thielen and defensively with safety Harrison Smith and their starting middle linebackers. But in the playoffs — I normally side with the team that has the better quarterback – head coach combination, and that would be San Francisco in this matchup.

While the other two matchups would present new opponents to the 49ers, if the Seahawks were to advance, it would be the third time that the San Francisco and Seattle face off this season. The TV networks and NFL would love another tilt between the two NFC West heavy-weights, but it would certainly present the toughest test to the 49ers.

The Seahawks may not be a formidable as they were in their first run, they still have a Hall-of-Fame level coach and quarterback in Pete Carroll and Russell Wilson, meaning they can never be counted out.

Beyond Wilson and Seattle’s offense, there’s not much that scares me about this version of the Seahawks. Defensively, pass rusher Jadeveon Clowney was held with no sacks in the Week 17 matchup, while linebackers Bobby Wagner and K.J. Wright were out of position a lot. Kyle Shanahan’s offense was able to hang 26 points and 398 yards in Seattle. I’d have no problem believing that Garoppolo and the offense running the Seahawks up and down the field in a playoff game.

Offensively, Wilson has presented a lot of challenges to the 49ers’ defense, given up the ability to scramble and pull a magician’s act in the pocket. In the second half of the Week 17 tilt, Wilson was spectacular, bringing the Seahawks to an inch away from an erasing a 13-point deficit.

But, Seattle lost pass rusher Mychal Kendricks for the season, and they will likely be depending heavily on rookie running back Travis Homer and aging Marshawn Lynch (who wasn’t very good) in the playoffs. For a team that’s struggled to create a pass rush and depends heavily on their rushing attack, those are glaring red flags.

The 49ers will also get Dee Ford and Jaquiski Tartt back in the playoffs, two of the better defensive players for San Francisco that will help limit Wilson’s effectiveness in the pocket and make it tougher on his receivers.

Yet, a game that features Seattle and San Francisco is always going to involve high pressure and come down to the crunch time. While I think the 49ers would have a huge advantage at home and given the extra week of rest, Wilson and Carroll won’t ever make it easy.

Given the circumstances, which team do you think the 49ers want to face off in the divisional round?