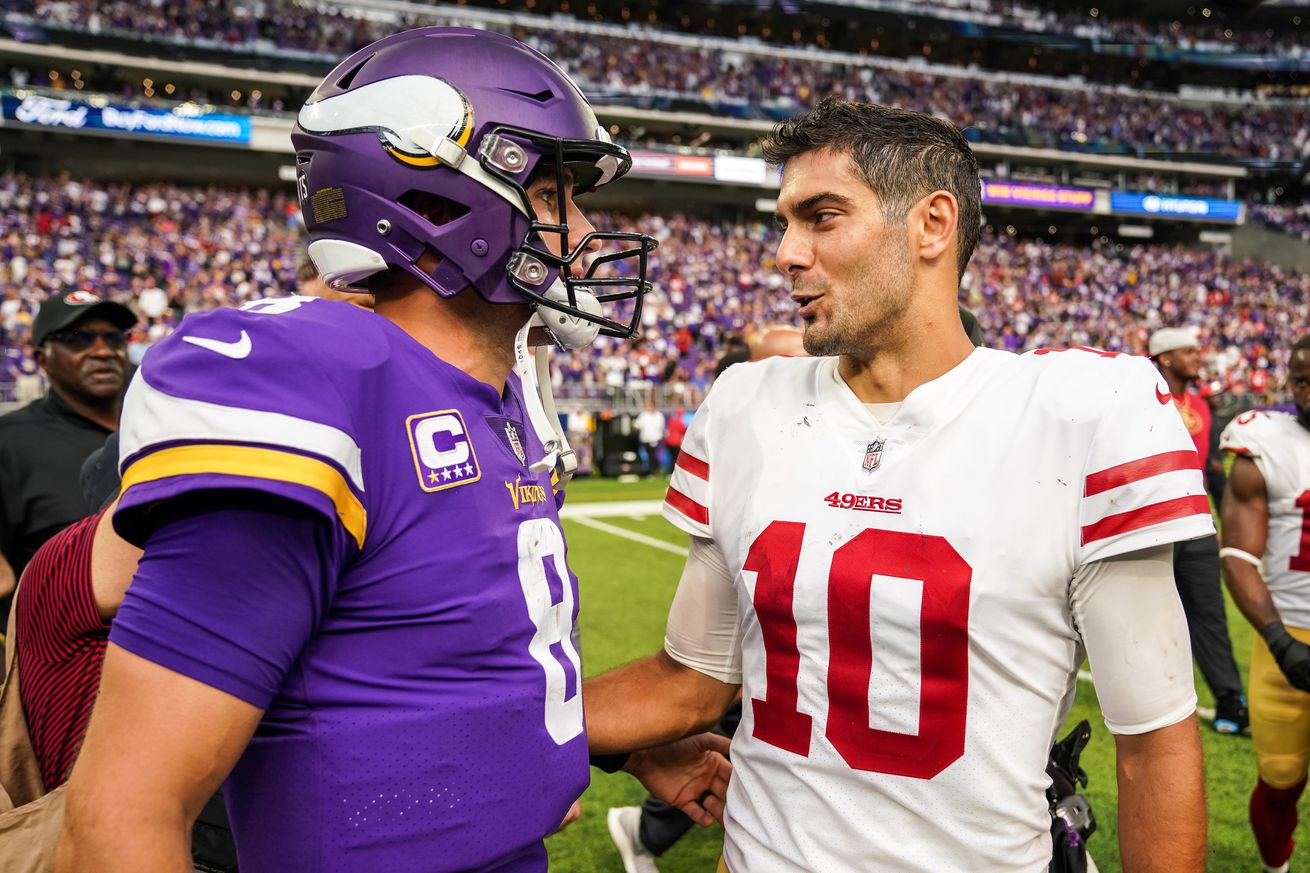 While the Vikings are the lowest remaining NFC seed, the 49ers shouldn’t take them lightly — otherwise it could be one and done for San Francisco

Just speaking with casual fans ahead of the Vikings–Saints’ game, most of them had a difficult time believing that Minnesota quarterback Kirk Cousins could walk into New Orleans and knock off Drew Brees and the Saints — but that’s exactly what he did.

The beauty of the knock-out style NFL playoffs is in the high level of uncertainty that it provides because, on any given day, any team can be sent home packing for the summer.

Thanks to Dre Greenlaw’s clinch-by-an-inch tackle at Century Link Field, the 49ers were able to watch Wild Card weekend from their couches, eagerly awaiting their opponent for the second round.

Since Cousins and the Vikings knocked off New Orleans, they will be coming to Levi’s Stadium for Kyle Shanahan’s playoff debut as a head coach. The NFC’s No. 1 seed opened as seven-point favorites over Mike Zimmer’s team, which is a large spread for a playoff game.

Since 1970, the 49ers have only been favored by more than seven points in a playoff game twice. Safe to say that Las Vegas and most fans believe that San Francisco will win — and win big against Minnesota.

While Zimmer’s team finished the season 11-5, they were a playoff team for the latter half of the season and had a chance to clinch the NFC North with two weeks to go in the season. This Kirk Cousins-led team is definitely one of the better sixth seeds that I can remember in recent history.

All season, one of the advanced metrics that I have been keeping track of weekly is Football Outsiders’ DVOA, and there are three teams in the NFL that are ranked in the Top-10 for both offensive and defensive DVOA: the one-seeded Ravens and 49ers — and the Vikings.

While their records aren’t the same, San Francisco and Minnesota have very similar philosophies on both sides of the ball. Both squads pride themselves on a strong rushing attack, followed up with a dominant play-action passing game.

San Francisco and Minnesota are second and third respectively in the NFL at rushing attempts, with both teams averaging just north of 30 attempts per game. The Vikings are heralded by former Seminole Dalvin Cook, while the 49ers take more of a running-back-by-committee approach under Shanahan.

The 49ers have the NFL’s best tight end in George Kittle, while the Vikings have a dynamic duo at wide receiver in Adam Thielen and Stefon Diggs. All of these playmakers become unstoppable when their rushing attack is gashing opposing defenses.

Defensively, both rosters have dominant defensive lines, the 49ers featuring a “Big Four” of Nick Bosa, DeForest Buckner, Arik Armstead, and Dee Ford. At the same time, the latter is led by pass rushers Danielle Hunter and Everson Griffen. Both teams were top-10 in sack percentage, with San Francisco at third and Minnesota sitting at tenth — so they can definitely get after the quarterback.

Now looking at the most important player on the field for both teams — Jimmy Garoppolo and Kirk Cousins. In the regular season, Garoppolo threw 27 touchdowns, while Cousins threw 26. Both had similar quarterback ratings, Garoppolo at 59 and Cousins at 58.7. They also complete the same percentage of passes at 69 percent. They are similar players, except Garoppolo can go off script and make plays when the initial read breaks down — while Cousins has not shown the ability to do so.

Most 49ers’ fans are dismissing the Vikings’ chances on Saturday at Levi’s Stadium, given the fact their signal-caller is Kirk Cousins — who’s biggest win of his career came two days ago in New Orleans. Most casual watchers probably remember Cousins’ performance vs. Green Bay and at Seattle on Monday Night Football — where he made numerous mistakes and could not lead his team to victory in pivotal matchups.

The Saints were probably the biggest threat to the 49ers in the NFC, and the Vikings just man-handled them in one of the toughest environments, by successfully running the ball, hitting timely big plays and then rushing the opposing passer. The Vikings will try to put forth the same game plan, but the 49ers cannot afford to fall into the same trap.

Minnesota has playmakers all over the field and can methodically win a game — even on the road in a hostile environment. The Vikings will be well-coached and coming into Levi’s Stadium with all the momentum. San Francisco cannot look at them as a typical sixth seed and should not underestimate them. Otherwise, they could be looking at a one-and-done in the playoffs.