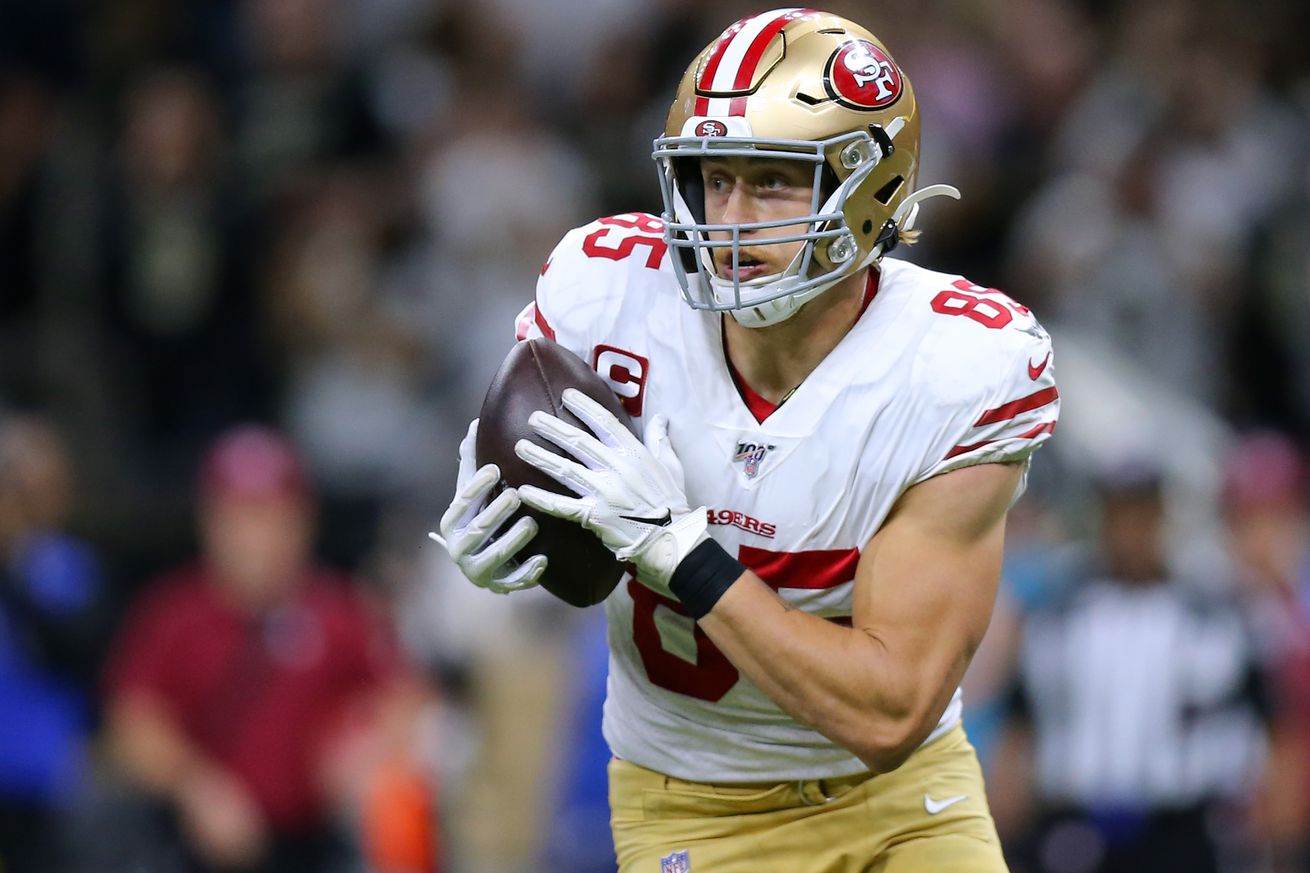 With a victory over the New Orleans Saints, the San Francisco 49ers are back in first place in the NFC West. It was one of the more entertaining regular-season games that you’ll ever see. Let’s talk about some of the winners and losers from Sunday’s contest.

Sunday was one of the best coaching performances you’ll see from an offensive point of view. Shanahan tallied his best win as a 49ers coach. The Niners were on fire offensively. San Francisco averaged 8.2 yards per play and had over 515 yards of offense. The passing game couldn’t be stopped, but New Orleans didn’t have an answer for the ground game, either. The 49ers converted 50% of their third-down conversions and went 4 of 6 in the red zone. All of this is a reflection of Shanahan, who went deep into his bag of tricks. We saw a double-reverse pass, a speed option with Kyle Juszczyk and Raheem Mostert, and a throwback screen.

Shanahan kept the defense on their toes, and with the trick plays and all of the motion, all it did was open up the middle of the field. It was a masterful performance by the head coach.

I thought that was the best Garoppolo has thrown the ball all season. I thought, for the most part, Jimmy played fast. When he is quick to pull the trigger and confident in his reads, you’re not beating this team. His ball placement was where it needed to be, and when there was pressure, we saw Garoppolo use his athleticism to buy time. The best part of Garoppolo and his four-touchdown, 349-yard performance, was that it didn’t look like he was pressing or playing out of his mind. Garoppolo’s performance is easily repeatable, which is good news for San Francisco.

The 49ers season turned around once they acquired Sanders. He’s made everyone around him better. The 49ers trading for Sanders helped Deebo Samuel more than anyone. Since the trade, Deebo is tenth in the NFL in receptions and ninth in yards. He has the third-most yards after the catch and has forced more missed tackles than anyone. I believe he’s helped Kendrick Bourne grow as a player as well, and both have admitted as much. Being a leader goes well beyond your play on the field.

Speaking of play on the field, Sanders is an okay wideout. He finished the game with seven catches for 157 yards and a touchdown. Sanders also threw a touchdown pass. The 75-yard bomb he caught was one of the better plays you’ll see from a wide receiver this season. The early passes Sanders caught were equally as important, as we saw what a healthy Sanders looks like after the catch. Sanders is the perfect fit for this team.

The first two touchdowns of the game were on the linebackers. It’s easy to kill Marcell Harris for missing the tackle, a tackle he should’ve made, but Fred Warner has his eyes stuck in the backfield and wasn’t relating to anyone. Warner should have carried Jared Cook down the field and forced Drew Brees to loft the ball over his head. Brees was able to throw it on a line, which didn’t allow Harris time to get there, and the result was a touchdown. On the second touchdown, Azeez Al-Shaair let Cook run right by him without laying a hand on him. As a linebacker, that’s a big no-no. If anyone crosses your face, you reroute them. The Saints did a nice job of attacking the 49ers coverage rules, and the linebackers were out of sync all game because of it. A tough day in coverage for the linebackers.

Dee Ford played four snaps before reaggravating his hamstring strain and will likely be out a month-ish. It’s been a disappointing season for the 49ers prized free-agent signing, who hasn’t played two full games worth of snaps back to back all year. Weston Richburg was lost for the season after he tore his patella tendon. Richard Sherman has a Grade 2 hamstring strain and will be out a few weeks as well. The secondary was already without Jaquiski Tartt, and we saw how much of an impact he makes. The team lost K’Waun Williams to a concussion and D.J. Jones to an ankle injury during the game as well.

Injuries are a part of this violent game, and they are inevitable. It happens to every team, and believe it or not; San Francisco isn’t one of the most injured teams in the NFL. The team’s depth has been tested this year, and they’ve passed the test, but they’ll have to do so for another three weeks, at least.

What made Garoppolo’s performance so good was that he was under pressure more this game than what felt like all season. The Saints were geared to stop the run, and San Francisco actually did a good job as a unit. The offense was successful on 14 of their 22 designed runs, which is 63%.

It was the Saints defensive line that won the matchup in the passing game, though. The tackles didn’t look too good on a few rushes, and the interior line was beaten a few times as well that forced Garoppolo to come off his read before he was ready to. The penalties are killer as well. False starts and holdings are tough to overcome. San Francisco was able to this game, but after stringing together some nice performances up front, the line took a step back on Sunday.

It didn’t seem as if the 49ers defense was prepared to stop the Saints through the air, and that starts at the top. Offenses haven’t been able to threaten the 49ers vertically due to the pass rush, but that changed Sunday. The Saints scored four touchdowns in the first half. The tackling was shotty, and Brees was picking apart the Niners defense through the air. As well as the scheme has been, it felt like there needed to be more adjustments. I wanted to see more in your face man coverage to at least take away the easy throwing lanes.

I thought the third quarter adjustments went well, but the fourth quarter was more like the first half. It’s not fair to expect Saleh to be lights out each game, but Sean Payton got the best of him Sunday.

I’m not going to say he won the game, but I wouldn’t argue it if you did. Kittle continued his dominant run-blocking against the Saints. Kittle caught six passes for 67 yards, and 66 of those came after contact. He forced two missed tackles, caught a touchdown, and obviously had one of the most memorable plays of the year to end the game. Another ho-hum game for the best player at his position.

Bosa hasn’t been in the box score as much the past month due to seeing more attention and not having the same responsibilities. Against the Saints, Bosa was Bosa again. He was constantly in the backfield and, when the team needed him most, he made a play. Bosa didn’t have a sack on the day, but he did hit Brees twice.

Bosa had one of the biggest plays of the game. The Saints had 3rd & 1 in the second quarter, and if they converted, they probably bleed the clock and prevent San Francisco from scoring. Bosa makes a tackle for loss after fighting off a holding penalty and forces the Saints to punt. The Niners get the ball back with four minutes to go in the half as opposed to two and have enough time to score. Thanks, Bosa.

Touchdowns matter, and Bourne has five touchdowns since Sanders has been on the team. That’s no coincidence. It’s evident that Bourne is figuring it out. Of his 27 receptions, 25 of those have gone for a first down or a touchdown. When Bourne touches the ball, something good happens for the 49ers. The team needed a third reliable target outside of Sanders and Samuel at receiver, and Bourne is that guy.