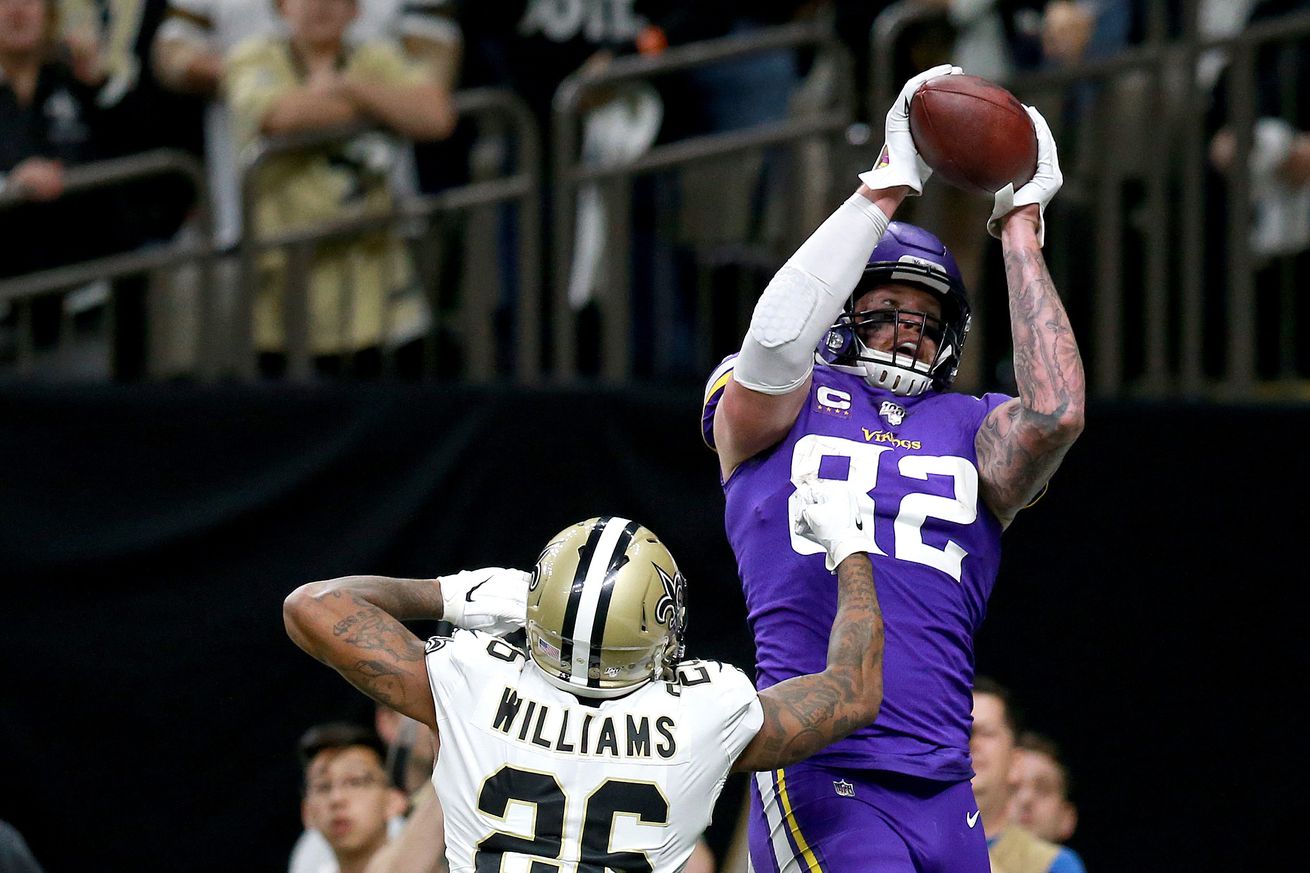 On Monday, we went over five takeaways from the Minnesota Vikings upset over the New Orleans Saints. Now let’s go over some of the winners and losers, and how it affects the San Francisco 49ers.

Thielen fumbled on the opening possession, but after that, it was smooth sailing. He had one drop, but he caught every other target. Thielen finished the day with seven catches. Six of those went for first downs. Thielen ended the game with 129 yards, including the 43-yard catch to put the Vikings near the goal line and win.

What makes Thielen dangerous is that he can not only run every route but win every route. Whether it’s a quick out route or a double move down the field, the 49ers defensive backs will have their ball skills tested. When the ball is in the air, Thielen is one of the best receivers in the NFL at adjusting and tracking the ball. He’s a fantastic player that does everything well.

Like Thielen, Hunter is one of the best players in the NFL at his position, so it’s no surprise he had success against the Saints. Hunter finished with two sacks, one quarterback hit, and also batted another pass. More importantly, he rarely came off the field. Hunter played 49 of 55 snaps, so Mike McGlinchey will have his hands full.

The Vikings had a different approach with their edge rushers, per their defensive line coach:

”We were trying to find a way to get [Everson Griffen & Danielle Hunter] on their guards. It changed Brees’ demeanor in the course of the game. He likes to step up, but seeing 97 & 99 inside made him stay high & that helped us.”

Both of Hunter’s sacks came outside, though. Saints right tackle Ryan Ramczyk didn’t allow a sack all season but gave up two Sunday. Griffen and Hunter combined for four sacks and eight total pressures. The Niner’s offensive line, especially their tackles, will have their hands full. Hunter is a superstar.

Cousins has been ruining past narratives all season, and Sunday was no different. Cousins did hold onto the ball that got himself into some trouble (two sacks four batted passes), but he moved the chains. Of his 19 completions, 11 went for first downs, and one other was the game-winner to Kyle Rudolph. On throws over ten yards, Cousins was 6 for 10 122 yards. He delivered some big-time throws under pressure.

A Vikings fan told me that right tackle Brian O’Neil got the best of Saints edge rusher Cam Jordan and referenced how PFF charged Jordan’s sack to Rudolph. I went back and watched the game. Jordan beat his man nine times in the game. The best games of the season for the Niners are from Arik Armstead and Nick Bosa, where they beat their man 11 times. Nine is an insanely high number. O’Neil had nine blown blocks on the game, and Rudolph gave up two sacks and didn’t have much of a chance against Jordan.

The Vikings gave O’Neil a lot of help, and usually from Rudolph. He was rarely 1-on-1 with Jordan, and there were a handful of times when he was “free” and not asked to block someone. That tells you all you need to know about the confidence the Vikings have in O’Neil. Armstead, Dee Ford, and Nick Bosa should have a field day rushing from the right side. I know Rudolph had the game-winning touchdown catch and is a reliable receiver, but he was getting worked as a blocker. For a team that’s in 12 personnel, 50% of the time, your tight end not being able to block seems like an issue.

Barr is a player I’ll never understand. A superb athlete that can’t seem to figure it out in coverage. He’s wildly inconsistent, and that has been the case for most of the season. Against the Saints, Barr was targeted ten times and gave up ten catches for 80 yards. He also missed three tackles. Since Week 11, Barr has been targeted 34 times. He’s allowed 31 receptions.

In Mike Zimmer’s defense, Barr is usually in a difficult position. I’d expect. Shanahan to go empty or spread them out and get Barr matched up on a receiver. The Saints got Michael Thomas matched up with Barr three times. Thomas caught each pass for 31 yards. This defense is susceptible to the “corner” route. Look out for a heavy dose of formations where Barr is forced to cover a slot receiver.