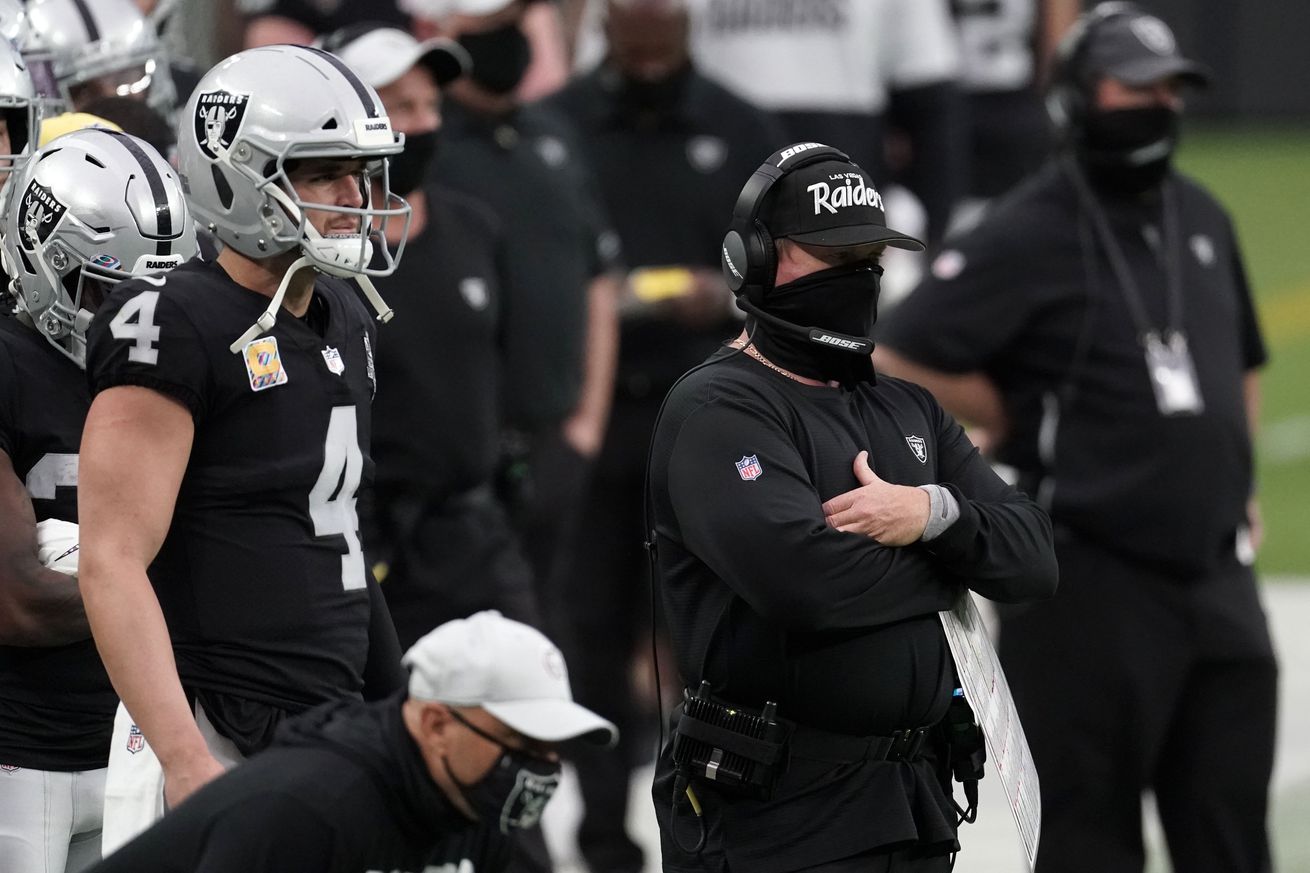 Right when the party was starting to bump, the parents got home and cut the power

On Sunday, the Las Vegas Raiders gave up an expected amount of points but scored an underwhelming amount and that is the most simplistic way to put what happened. The Tampa Bay Buccaneers have scored 38+ points in three of their last four games and the Raiders have allowed 30+ points in five of six contests. You can’t be distressed by the Las Vegas defense unless you didn’t comprehend what shape they’re in right now.

As noted many times already this season and I don’t expect this to stop being true in 2020: the Raiders are not good enough if Derek Carr is not great. Good is not enough.

Heading into the game against the Kansas City Chiefs, I wrote that Jon Gruden would need an offense that could compete with teams like the Chiefs and that up to this point Carr had not consistently proven to be that player. If he doesn’t begin to perform like that player, the Raiders will find a different quarterback.

Against Kansas City, Carr was that player and I wrote that I’m open to Carr being that player. Also that I would not change an opinion of a player based on only his best career performance. I would have been more surprised if Carr was as good as he was in Week 5 than if he played his worst game of the season.

You don’t even have to know anything about football to know that it is highly probable that Derek Carr was going to be worse this week than he was in the last game. That’s just statistics.

Carr was not terrible on Sunday, but this conversation was never about being terrible. It’s not about being bad. It’s not even about being the type of quarterback who simply avoids putting his team into holes they can’t climb out of because this isn’t even really about Carr. It’s about how bad the defense is.

The Raiders don’t need a quarterback who can be steady and dependable. They need a quarterback who can make up for the points that Las Vegas’ defense is going to give up to the Tom Brady type offenses of the league. In the game before this, that Carr and that offense showed up and Gruden was excited to announce his offense as arrived after so many proclamations of skepticism.

Well, in the first game after that game, the Raiders scored 20 points and are 0-3 when they fail to score 28 this season.

Carr completed his first three passes to Agholor and at that point his season numbers when throwing that way were 14 of 15, 248 yards, 3 TD.

Agholor finished with five catches for 107 yards. His yardage total has gone up in four consecutive games, from 19 yards to 32 yards to 44 yards to 67 yards to this week’s performance. So does that trend suggest that Agholor will top 107 yards against the Cleveland Browns in Week 8?

No, I would be surprised if Agholor continued to improve every week until forever.

I remember back in 1998 when The Sixth Sense in the theaters and it had a strange box office experience. The movie made $26 million in its opening weekend, but intense word of mouth buzz kept it in first place for over a month and by its fifth weekend, The Sixth Sense had hauled in more cash than in its first.

But eventually The Sixth Sense had to hit its sixth weekend.

This is Agholor’s sixth season and I’m not expecting him to turn into a Pro Bowl wideout because he recorded his fourth career 100-yard game. But he’s got staying power.

Raiders line up in I formation second down, play-fake and 28-yard strike to Nelson Agholor

Nelly was the biggest steal of the offseason !!!

Mike Mayock has invested a ton into the wide receiver position during his short tenure as GM and midway through his second season on the job, the top wideouts for the Raiders are Agholor, Henry Ruggs (two catches, 35 yards), Hunter Renfrow (four, 42), Zay Jones (no targets), Rico Gafford (no catches) and Bryan Edwards (inactive, injured). It’s not yet the fearsome group that Mayock and Gruden hope it will turn into eventually.

Exhibit A that the Raiders are still looking to confirm that they have a franchise QB and a number one receiver.

After holding Jones to -1 yards on his first two carries, the Bucs running back picked up 13, eight and nine on the next three plays. That put Tampa Bay in the red zone and then shortly afterwards in the end zone to tie the game 7-7 in the first quarter. Jones had five carries for 28 yards on the drive.

Jones finished with 13 carries for 34 yards and a touchdown, while Leonard Fournette had 11 carries for 50 yards and Tom Brady had a one-yard touchdown.

4 – Carr to Darren Waller to cut the lead in half

The game was much closer late in the third quarter than the final score would indicate. Darren Waller now has as many touchdowns this season (3) as he did all of last year.

Raiders fake punt for a first down! pic.twitter.com/ewveQhNSAq

Vegas executed a quality special teams play here to pick up a yard, but you have to wonder if this was the best spot of the season to give information about your trick plays to other teams. It did lead to three points eventually, but the Raiders were at their own 34 midway through the first quarter and it smelled of desperation. Perhaps then this is more of a compliment than a criticism, if only to say that Gruden was aware of the danger his team was facing.

6 – Henry Ruggs has proven to be an exciting rookie

I think it is safe to say that Ruggs played at least 40 snaps this week, which makes it his fourth such contest this season. His catch totals are three, one, two and two. Ruggs has caught eight passes and the Raiders will be playing their seventh game of the season next week.

I’m not criticizing Ruggs. I’m not criticizing the pick. I’m sure there are plenty of others out there who are highlighting some of the seasons we’ve seen around the league by rookie receivers in 2020. But expectations for a rookie to be your top player at any position are usually risky.

It’s not that Ruggs can’t produce plays like the one above, it’s that Las Vegas needs receivers who can produce them consistently. And Ruggs is one of the few who can do what he does at all. It’s going to take time to get there.

By all accounts, the Raiders are a better team with Trent Brown at right tackle and Johnathan Abram at safety and that wasn’t the case on Sunday. They may have missed coming off the reserve/COViD-19 list in time by only one day, so it seems probable that Las Vegas will have them back next week and that should make them a better team.

Chris Godwin puts the @Buccaneers up by 11 with a little toe drag. #GoBucs

By comparison, Derek Carr has three career games with four touchdowns and no interceptions and his most recent was in October of 2016. If the Bucs can build and orchestrate an offense capable of scoring as many points as they’re scoring this season with a 43-year-old quarterback, then I think it is fair to criticize many of the teams who can’t.

The fact that Las Vegas defense couldn’t stop this from happening is a different indictment. Even in their three wins, the Raiders have allowed nearly 30 points per game.

A lot of teams didn’t want or didn’t close the deal with Brady and right now he has 18 touchdowns and four interceptions through seven games. He has weapons, like Patrick Mahomes has weapons, but clearly a strong arm and weapons is not enough to be a valuable quarterback. He’s also turned Scotty Miller — six catches for 109 yards this week — into the weapon that people didn’t know was so dangerous.

Even if the game was 24-20 early in the fourth quarter, the Raiders were being outplayed and outcoached throughout. After both offenses had long drives early in the game, it was only Tampa Bay who had more in store in the first half; the Bucs had two drives of 85+ yards but LV’s longest drive on the series preceding those by Brady was 28 yards.

Late in the game, the Buccaneers didn’t need long drives because they were getting the ball deep in Raiders territory.

This was also the second time this season that the defense recorded no sacks and they have two other games where they only had one sack.

Josh Jacobs finished with 17 yards on 10 carries.
Left tackle Kolton Miller: “The Bucs have one of the toughest run defenses in the league. We did the best we could … given the circumstances. There were a couple of communication things and little details that hurt us.”

Just as I expected Carr to be worse than he was after his career-best, I believe Jacobs will be better next week after his career-worst performance. Jacobs was held to 17 yards on 10 carries, which does not bode well for my pre-season prediction of him leading the league in rushing. Not that my proclamation was looking solid prior to this week.

Jacobs now has 116 carries for 394 yards through six games, an average of 3.4 yards per carry.