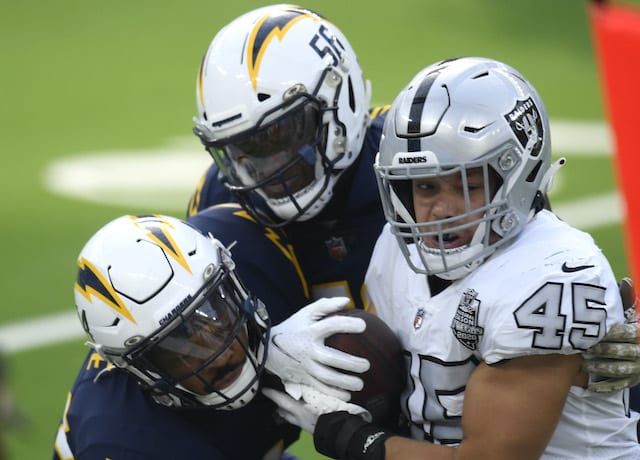 The Las Vegas Raiders managed to secure a thrilling, last-second victory over the Los Angeles Chargers in Week 9. Unfortunately, they did suffer a few key casualties in the process.

It started when cornerback Trayvon Mullen suffered a hamstring injury during the first half. It was not too long after that fullback Alec Ingold injured his ribs.

Ingold was officially ruled out for the rest of the game and had to watch it play out from the locker room. Fortunately, it appears he is in good spirits.

Ingold took to Instagram to celebrate the win from afar, posting a picture from a local hospital:

For those that may be unaware, Ingold is likening himself to Gary Bertier from “Remember the Titans” and how has was able to watch his team win a big game from the hospital. Although the severity of the injury has yet to be determined, it is safe to say that he was happy to see the Raiders pull out the win.

Ingold’s absence will leave a rather notable void in the run game for running back Josh Jacobs. He caught just one pass for six yards before leaving the game, however, his status as the lone fullback on the roster does call for some adjustments from head coach Jon Gruden.

Rather than bringing in a new fullback temporarily, it is safe to say that Gruden will likely rely on backup running back Jalen Richard and Devontae Booker to take on an increased workload in the backfield. While Jacobs remains as the primary workhorse on offense, Richard’s skill set as a viable pass-catcher should help to avoid a significant drop-off and Booker has been solid is bursts this season.

It is no secret that the Raiders have struggled to stay healthy amid the ongoing coronavirus (COVID-19) pandemic so far in the 2020 NFL season. The timing of these injuries is hardly ideal with AFC West matchups against the Denver Broncos and Kansas City Chiefs in the coming weeks.