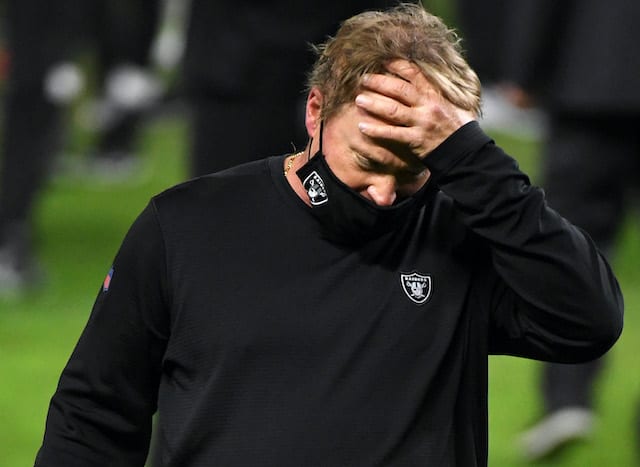 The Las Vegas Raiders got off to a hot start to the 2021 NFL season after finally opening the doors to Allegiant Stadium to their adoring fans. Unfortunately, things have taken a turn for the worst with head coach Jon Gruden resigning after a scandal.

According to Tom Pelissero of NFL.com, Gruden has informed the team that he intends to resign.

Source: Jon Gruden just informed his staff that he plans to resign as #Raiders coach.

Ahead of Week 5’s matchup against the Chicago Bears, a scandal involving Gruden became a hot topic of discussion. Emails from 2011 in which Gruden, who was working for ESPN at the time, used racist language to describe NFL Players Association leader DeMaurice Smith surfaced.

Although a judgment from the Raiders and team owner Mark Davis was pending following a statement released over the weekend, things got progressively worse for Gruden on Monday, via The Associated Press.

Raiders coach Jon Gruden frequently used misogynistic and homophobic language directed at Commissioner Roger Goodell and others in the NFL, according to emails reviewed by The New York Times.

The release of this information turned out to be enough for Gruden to make the decision to resign before he would inevitably be fired by Davis. The team will likely turn to defensive coordinator Gus Bradley or offensive coordinator Greg Olsen along with assistant coach Rich Bisaccia for leadership to fill the void for the time being while Davis and company decide the next course of action regarding the head coaching position in Las Vegas.

Gruden signed a 10-year deal worth $100 million with the Raiders back in 2018. He immediately cleaned house with some controversial and criticized trades to send stars Khalil Mack and Amari Cooper elsewhere. This was Gruden’s stint with the team and more than likely his last coaching job on any level as a result of this scandal.