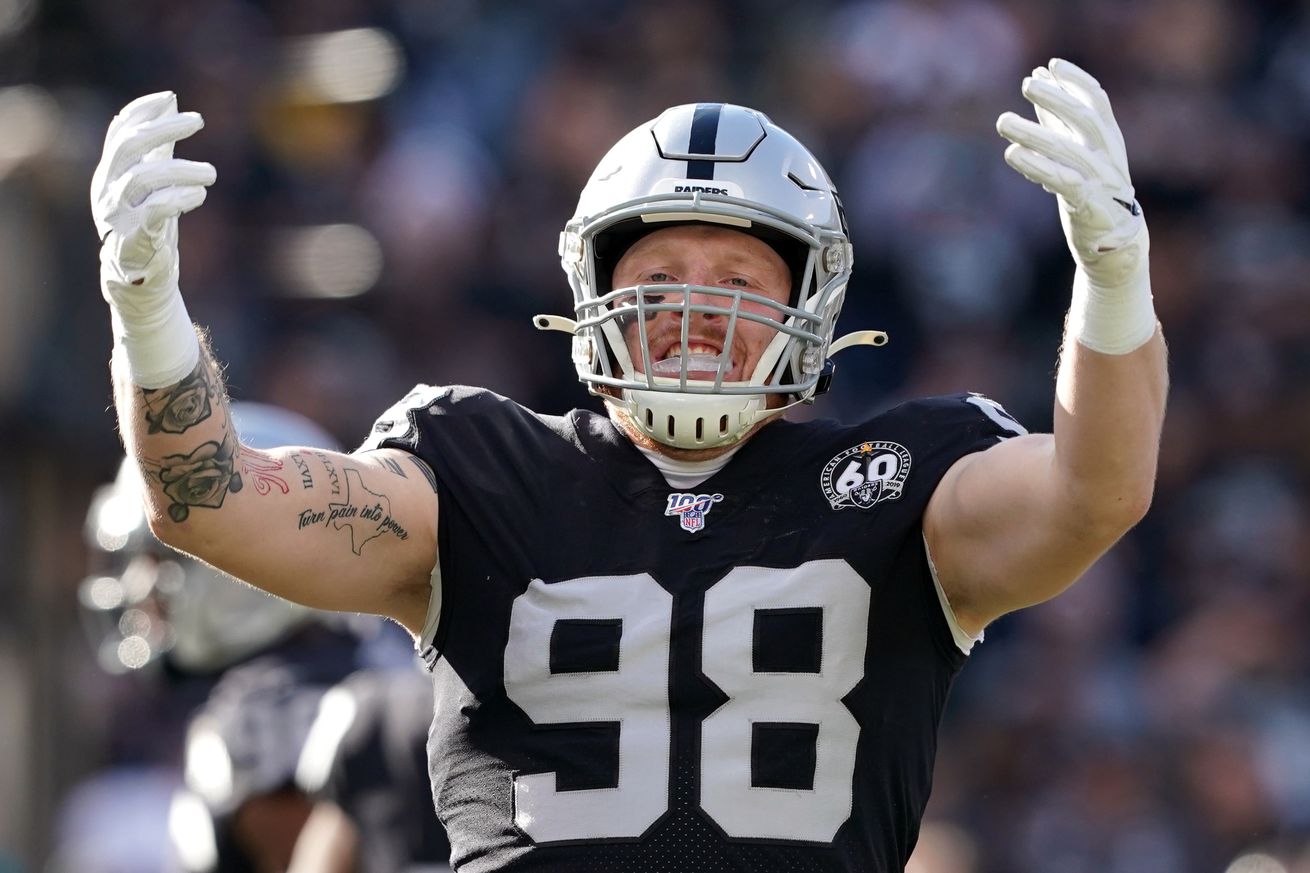 After being taken with the 106th overall pick, Maxx Crosby was quite possibly the steal of the 2019 draft. He posted 10 sacks, which was second in the NFL among rookies and second all-time among Raider rookies in franchise history.

Crosby’s impressive numbers have many Raiders supporters suggesting that he should overtake Nick Bosa as the Defensive Rookie of the Year, while others have pointed and laughed at the Chicago Bears after Khalil Mack posted only 8.5 sacks this season.

To get a legitimate understanding of how Crosby, Bosa, and Mack compared in 2019, we decided to look to Pro Football Reference, Sports Info Solutions, and Pro Football Focus.

Pro Football Reference data was simply used for the comparison of basic counting stats, while Sports Info Solutions data was used too look at pressure created and total points saved. Pro Football Focus, meanwhile, sits in its own category.

Looking at basic counting stats, this trio looks quite evenly stacked. They all have about the same amount of total tackles, with Mack and Bosa both at 47 and Crosby sitting at 46. Crosby leads the trio in sacks, and he’s tied with Bosa with 16 tackles for loss, doubling Mack’s 8 TFL output. If you simply compare the basic counting stats, these three look quite similar.

Sports Info Solutions charts every single minute detail about a defenders’ pass rush productivity, which helps us understand how they achieve those basic counting stats. As far as the accuracy of the charting data goes, I’m quite confident in the Raiders’ stat precision, since I charted many of their games myself.

While looking at pressure rate, it’s clear that Crosby isn’t quite as productive on a snap-by-snap basis as the other two. While sacks can be a fickle and fluctuating stat, pressure rate has a much stronger year-to-year correlation.

While Crosby was completely dwarfed by Bosa and Mack in hurries, his 2.2 percent sack rate looks sustainable, meaning he has a solid chance to replicate his 2019 sack output next year. In 2018, Mack had an unsustainable 3.0 percent sack rate, which came back to Earth this season, accounting for much of the difference between his 12.5 and 8.5 sack production.

For an in-depth explanation of terms Sports Info Solutions uses, check out the glossary here.

Here’s where that lesson we learned earlier this season in Estimated Points Added comes into play. Total points saved is metric that uses a team’s accumulated EPA and factors in what each player on the field did on each play to distribute positive or negative credit.

In terms of pass rush points saved, Bosa is far and away the best of the three. That could have something to do with San Francisco’s defense being simply better than the Raiders and Bears units, but it also has a lot to do with his pressure rate and some of the clutch plays he’s been a part of.

While many have pointed to Crosby’s run stopping as a weak point, suggesting that he needs to add strength, Crosby actually is a better run defender than Mack by this metric. One of the likely reasons for this is Crosby’s propensity to take down ball carriers in the backfield when he’s left unblocked on the edge. At multiple points this season, teams have left Crosby unblocked on outside runs, trusting that their ball carrier will be able to outrun the defender to the edge. But Crosby is so damn fast that he’s thwarted many of those rushes, and those splashy plays he’s made in the backfield contribute to his run defense points saved heavily since they negatively affect the opposition’s EPA.

While Pro Football Focus has Bosa and Mack with nearly identical season-long grades, they’ve left Crosby way down the list with a pedestrian 65.5 overall grade.

The glaring discrepancy between PFF’s run defense grade and SIS’ run defense points saved is quite notable. PFF relies on the eye test more, while SIS likes to let the numbers do the talking.

While Maxx Crosby is obviously a stud (and is easily the best 2019 draft pick in terms of value at this point), he still isn’t quite at the level of Bosa and Mack when you look past the basic counting stats.

Bosa has been one of the most disruptive players in the entire NFL, so the fact that Crosby is even in the conversation for DROY is a massive compliment.

The main argument that I’ve heard regarding Crosby’s candidacy is the lack of talent around him. That’s inarguable at this point. The 49ers fielded one of the decade’s top defenses, Chicago has one of the better defenses in the NFL, and the Raiders are one of the worst.

Crosby also didn’t burst onto the scene until about Week 5, when he recorded his first sack and began to go on a midseason tear.

Two things to keep in mind when evaluating Crosby’s 2019 season are his 4 sack game against an abysmal Bengals offensive line, which accounted for a lot of his production, and the fact that his 10th and final sack actually shouldn’t have counted at all. Crosby was given a sack and forced fumble on a play where Drew Lock’s arm was actually going forward. Since there was no turnover on the play, it wasn’t reviewed. But if there was a review, Crosby would be tied with Bosa at 9 sacks and would have 3 forced fumbles instead of 4.

Despite that, Crosby still has the looks of one of the top up-and-coming defensive ends in the league. He’s long, fleet-footed, hard-working, and tenacious as all hell.

The fact that we are even having this discussion shows just how much he’s grown this season, but it also highlights that he has a little ways to go to truly be placed among the elite defensive ends.