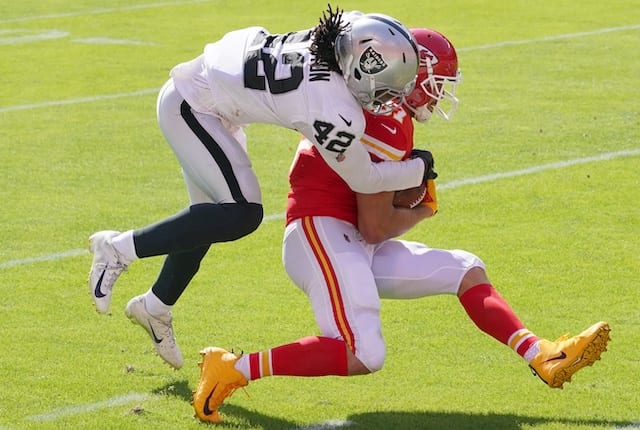 The Las Vegas Raiders made a splash last offseason with the signing of linebacker Cory Littleton to a three-year, $36 million deal in free agency.

The arrival of Littleton and Nick Kwiatkoski was supposed to turn the linebacker corps into an area of strength after being labeled as a weakness in year’s past. Unfortunately, the defense remained as porous as ever while Littleton’s debut season with the Raiders fell vastly short of expectations.

To say that the 2020 NFL season was a disappointment would be an understatement. It appears Littleton is not sugar-coating anything about how this year played out.

Littleton admits that he came nowhere close to the personal goals he had set for himself, per Jerry McDonald of The Mercury News:

“It came out miserably,” Littleton said with a sheepish chuckle. “I’ve always said that I wanted to keep myself and keep my play as a top-five linebacker. And the two previous seasons I had. I didn’t come nowhere close to it this year.”

Littleton added that he did feel some improvement as the year went on:

“I don’t know if I can actually pinpoint an exact date or time, but I can say as the season progressed I felt more and more comfortable through the year,” Littleton said. “Earlier in the season, I felt like a chicken with its head cut off.”

Littleton had made his bones with the Los Angeles Rams as an undrated free agent that found a way to contribute on special teams. His playmaking ability helped him rise through the ranks and he was eventually named an All-Pro in 2018.

Littleton’s skill set as a bonafide playmaker had all but disappeared with the Raiders as he finished the year with just 82 tackles and four tackles for loss. He failed to even record a single sack, pass defense, interception or forced fumble.

Although Littleton’s performance may have been extremely underwhelming, there was not much stability around the team to help him out. The coronavirus (COVID-19) pandemic robbed new players of a full offseason with their respective teams while coordinator Paul Guenther was eventually relieved of his duties in December.

It is safe to say that Littleton is anxious to prove himself once again like he did when he was just starting out as a special teamer with the Rams. It will be interesting to see which candidate is tasked with taking Guenther’s place and utilizing the players at their disposal.