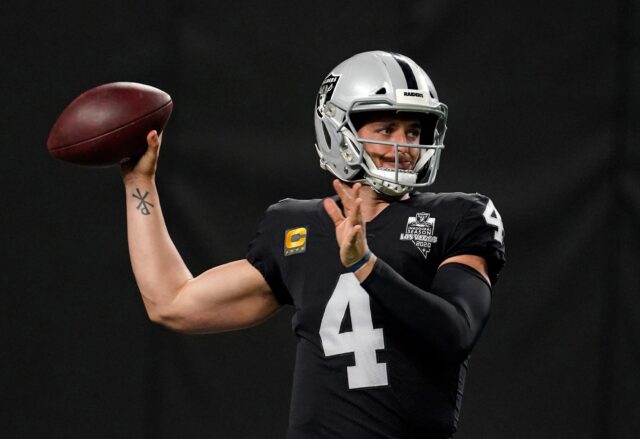 Since head coach Jon Gruden arrived to the Las Vegas Raiders, the franchise has steadily improved and looks much closer to getting back to the NFL playoffs.

Gruden and general manager Mike Mayock have done a good job of retooling the roster and restocking it with young talent and veteran players who complement their core on both sides of the football. Although the infusion of new blood has helped turn the franchise around, Derek Carr has remained a productive constant for Las Vegas.

Carr’s leadership and understanding of Gruden’s offense had them on the cusp of a playoff berth during the 2020 season, but he and the Raiders ultimately fell short in their goal. However, Carr has remained dedicated to Las Vegas despite small rumors that they could be looking to move on from him at some point in the future.

Although the Raiders have their work cut out for them, Carr is still focused on his goal of winning a Super Bowl with the team that drafted him via Levi Edwards of Raiders.com:

“I want to hold that Lombardi Trophy as a Raider.”

It is an emphatic declaration that Carr considers himself entrenched with the Silver and Black, and this will surely win him even more fans of the team. Although he might not be one of the premier or elite quarterbacks in the league, Carr is still a solid option and could absolutely make some noise with the Raiders should things break right.

However, things have not gone Carr or Las Vegas’s way as they have not been good enough to make the playoffs. Carr’s best attempt so far was during the 2016 season, where he was in the MVP discussion before unfortunately fracturing his fibula in Week 16. There were talks that Carr could have been able to play in Super Bowl LI if the Raiders made it that far, but they were ultimately eliminated in the Wild Card Round by the Houston Texans.

The 2021 season is filled with several contenders, and even though the Raiders may not be considered one now, Carr’s play could move them into the conversation.

The post Derek Carr Wants To ‘Hold That Lombardi Trophy As A Raider’ appeared first on Raiders Newswire.