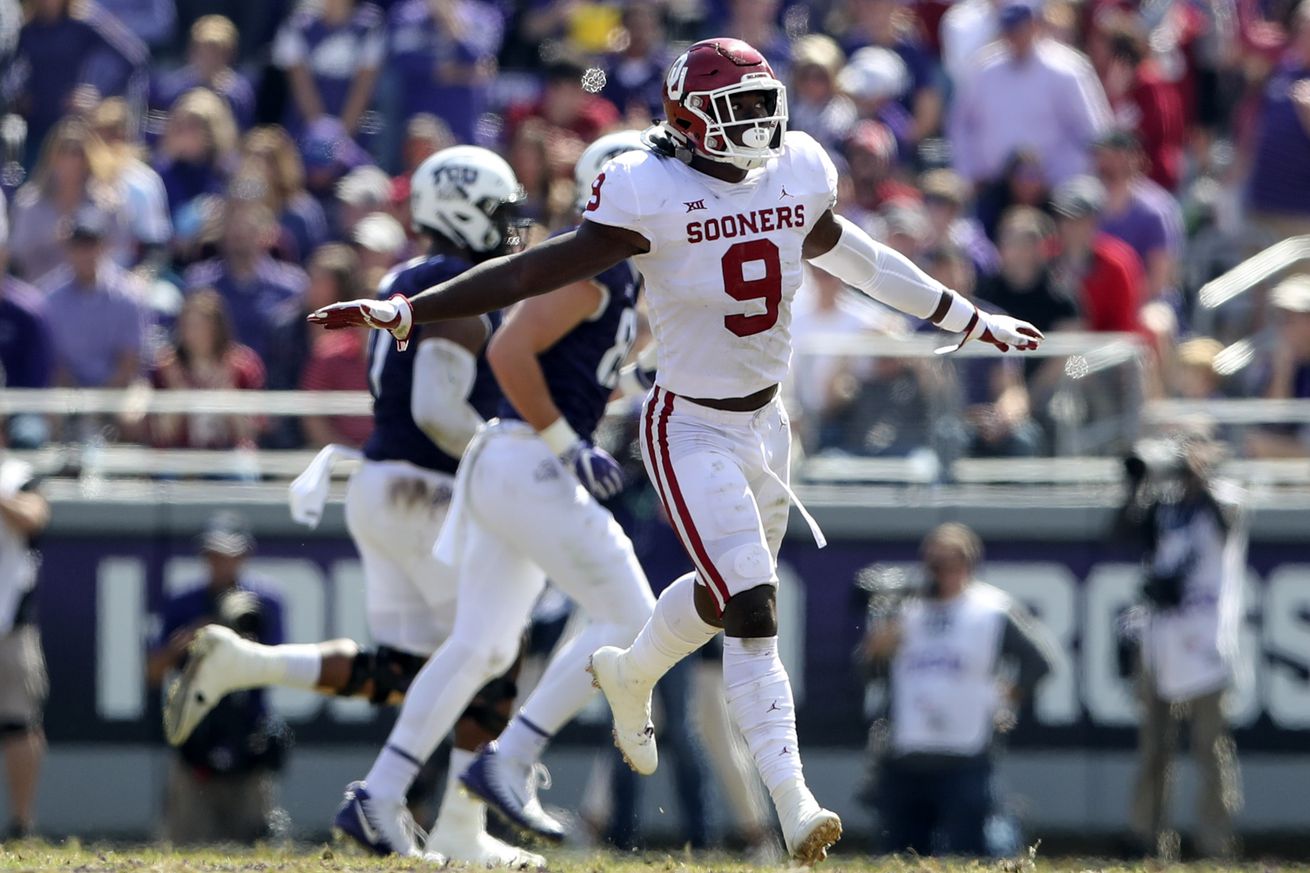 Kenneth Murray will be linked to the Raiders all offseason, so we might as well take an in-depth look at what he could bring to the table

With the regular season in the rearview mirror, we are highlighting some prospects that Jon Gruden and Mike Mayock may consider in the upcoming draft. You can take a look at all of our previous prospect reports here. Who would you like to see highlighted next week?

Dylan Moses made his intensions to return to Alabama clear this week, meaning that Oklahoma linebacker Kenneth Murray will likely be linked to the Raiders all offseason.

Linebacker and wide receiver are clearly this franchise’s top needs, and while there are a ton of top tier receives available, this draft is a bit lacking in surefire studs at the off-ball linebacker spot. And with the team seemingly needing a complete overhaul at the position, it wouldn’t be a surprise if they signed someone in free agency before bringing in a draft pick like Murray.

The captain of the Oklahoma defense has leapt up draft boards this year due to his excellent play speed, tenacity and sure tackling. With most modern NFL offenses opting to spread defenses out to force them to cover more ground, speed has never been more important for linebackers, and that’s truly Murray’s selling point.

He’s explosive sideline-to-sideline and downhill, routinely erasing sweeps and off-tackle runs to either side of the field when he starts in the middle. His motor constantly runs hot, and while he isn’t a brutish force at 6-foot-2, 235 pounds, Murray still will deliver some punishing hits now and then.

If you want to add some intensity, leadership, and attitude to the center of your defense, draft Kenneth Murray. He brings it every single play.pic.twitter.com/HUw81pW9bh

While his speed and technique are impressive, Murray would actually be a click faster if he was more decisive with his reads. This is a point of debate between people who have watched a lot of Murray film and those who have only scouted him while Oklahoma is on ESPN. Murray often hangs back with a quick shuffle step, reading the play before descending like a hawk.

This could be a function of Oklahoma’s defensive scheme. They face a lot of Big 12 teams that run read option plays, and the team could simply be asking him to wait to choose an inside or outside run fit based on a whether he reads give or keep. But scheme or not, his willingness to let plays develop and rely on his speed is a little worrisome because it gives offensive linemen time to get up to the second level.

Due to his elite reactionary athleticism, Murray’s read-and-react style still worked well for him at the college level, but it clouds a bit of our understanding of his instincts at the position without first talking to the Oklahoma coaching staff.

If he fails to develop beyond a read-and-react style, Murray will have some trouble utilizing his speed, as he’s not great at navigating through trash at this point. He simply doesn’t have much of a plan when faced with oncoming blockers besides running around them, which he won’t always be able to do at the NFL level. Murray doesn’t use his hands violently in block destruction situations, letting blockers get into his chest and take him out of the play at times.

If his problem fighting through blocks persists, Murray will be pigeonholed into a Will linebacker role, where his ability against the pass will be relied on a lot more.

Against the pass, you’d think Murray would be quite good in coverage due to his speed, but he’s actually best used as a blitzer and QB spy.

K9 was out there huntin’ against Texas.

“And he closes like a bullet. Kenneth Murray is playing some football.” — Joel Klatt#OUDNA | #BoomerSooner pic.twitter.com/UXvrUEHEqI

As a blitzer, he’s hard-charging and often breaks the line of scrimmage too quickly for college offensive lines to react in time. While he won’t always make a splash play in the backfield, his presence while blitzing is usually enough to disrupt opposing offenses in a major way.

His ability as a QB spy is what will get a lot of teams riled up, especially in the AFC where fleet-footed quarterbacks like Lamar Jackson, Deshaun Watson and Patrick Mahomes will be tearing it up for years to come.

Murray can help neutralize the impact of quarterbacks with that speed in a similar manner to how the Bills used Tremaine Edmunds to string Deshaun Watson to the sideline for minimal yardage on a multitude of scrambles during their Wild Card showdown.

Typically Mike linebackers are used to spy the QB, while the Will goes out in coverage. So if Murray can bulk up a bit and become better with his block destruction, a move to the Mike spot could be a more natural fit for him. Otherwise, the Raiders could simply move Murray to the Mike spot in passing situations, while bringing in a sub package coverage linebacker to take over the Will spot.

While Murray is quite good as a blitzer and QB spy, he isn’t great at turning and running in coverage. He is the type of player who likes to see what is in front of him, decide what he’s going to do, and then break on the ball like a heat-seeking missile.

You can’t be a heat-seeking missile downfield in coverage, however, and Murray’s zone drops can get sloppy while his route recognition is subpar at the moment.

Many see Murray’s speed and immediately think that he’d be great in coverage, but that isn’t his strong suit. He has proven capable of sticking with running backs and tight ends running downfield, but he doesn’t have the keen sense of when to get his head around to make a play on the ball.

Murray is a fun but tough evaluation because he’s so good at the things he does well that it can blind onlookers from seeing his foibles. His top tier traits will be tantalizing to the Raiders come draft night, but I’m not sure if they’ll be enough for the franchise to value him as a first round prospect.

Mayock will like the fact that Murray’s a defensive captain who can make calls and be trusted to get his teammates in their proper alignment. Plus, he’s a proven winner from a blue blood football program with awesome explosiveness for his position.

If Murray comes into the combine and runs a 4.4 40-yard dash, there is no way he gets out of the first round. Fast, physical linebackers are simply too hard to come by.

Draft Range: Mid- to late-first round