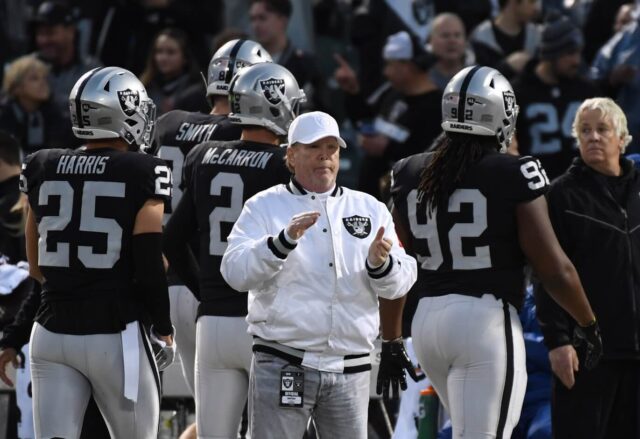 Although the 2021 NFL Draft and 2021 season are coming into view for the Las Vegas Raiders, the social injustices that exist within America were once again at the forefront after the recent trial of Derek Chauvin.

Chauvin was the police officer responsible for murdering George Floyd, kneeling on the back of his neck for nine minutes and 29 seconds. Despite Floyd repeatedly saying, “I can’t breathe,” Chauvin did not stop kneeling and was later charged on three different counts.

The jury in Chauvin’s trial quickly reached a verdict, finding him guilty on charges of second-degree unintentional murder, third-degree murder, and second-degree manslaughter. In response to the verdict, the Raiders sent out a tweet saying, “I CAN BREATHE 4-20-21,” but received widespread backlash for it.

However, Floyd’s brother Philonise Floyd released a statement thanking the Raiders organization for their support via Josh Dubow of AP.

Numerous people who saw the tweet believed it to be tone-deaf and lacking empathy given the circumstances regarding Floyd’s death. Raiders owner Mark Davis took full responsibility for the tweet and defended the phrasing as he cited a quote Floyd’s brother said in the verdict’s aftermath. He added he did not plan on deleting the tweet but did acknowledge that he meant no offense and would apologize to the Floyd family if it caused any harm or distress.

Davis’ explanation makes sense, but without the proper context, it is easy to see why the tweet was misconstrued and heavily criticized. However, it was good to hear Davis admit that there is still a lot of work to be done regarding social justice and police brutality, especially when athletes are more empowered to use their platforms to stir action and change.

Football is secondary when it comes to these kinds of issues, but at least the nation can take solace that justice and accountability were finally handed out.