Hunter Renfrow suffered a scary injury Sunday and may not return this season. The rookie slot target suffered a puncture lung and a broken rib in the loss to the Jets, Ian Rapoport of NFL.com tweets, and Jon Gruden is not sure if the Clemson product will return in 2019. 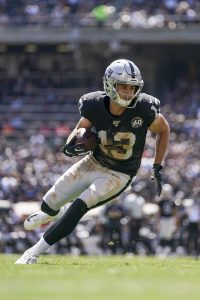 Gruden acknowledged Renfrow may be done for the season (Twitter link). More tests are scheduled, but that would obviously be a blow to a resurgent Raiders team with designs on a playoff berth. The Raiders will travel to Kansas City in Week 13.

The fifth-round rookie took hard hits from Jet defenders Bless Austin and Henry Anderson and left the game. Renfrow still led all Raider receivers with three receptions for 31 yards in the 34-3 rout.

In the wake of Antonio Brown‘s bizarre Raiders stretch, Renfrow helped the team’s passing game recover. He has 36 receptions for 396 yards and two touchdowns. Only Tyrell Williams has more receiving yards than Renfrow among Raiders this season. The team will need to turn to trade acquisitions Zay Jones and Trevor Davis, along with potentially rookie Keelan Doss, more after this news.