With training camp approaching, attention is being turned to each team’s top positional battles and some of the players most in danger of not making final roster cuts. While it is inevitable that a number of players, including notable names, suffer that fate in the build-up to the season, it is another matter when it happens to former top-five picks. 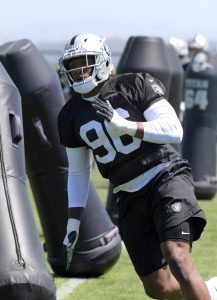 Clelin Ferrell “might be on high alert” regarding his roster status, per ESPN’s Paul Gutierrez. The 2019 No. 4 overall pick has proven doubts over his draft stock to be well-founded. After a 4.5 sack rookie season, Ferrell has seen his playing time drop over the past two years. He didn’t register a start in 2021, playing only 24% of defensive snaps. The presence of not only classmate Maxx Crosby, but also Yannick Ngakoue, relegated him to a backup role.

Ngakoue has seen been replaced by Chandler Jones, so Ferrell is likely to once again be shut out of a starting spot on the edge. As a result, it will be interesting to see how far new defensive coordinator Patrick Graham takes the experiment of using Ferrell at defensive tackle throughout the remainder of the offseason. Significant playing time along the interior of the team’s d-line could help extend his career in Las Vegas, or generate a market for him elsewhere.

Just like fellow 2019 first-rounders Josh Jacobs and Johnathan Abram, Ferrell had his fifth-year option declined this offseason. That leaves him need of a much more productive season in 2022 than the three he has put together to date, as he moves towards free agency for the first time in his career. Before looking that far ahead, however, he needs to ensure he will have a roster spot come the fall – something which is in doubt to a far greater degree than many would have expected when he entered the league.