Myles Garrett is no longer the only player to be suspended for using his helmet as a weapon this season. Raiders cornerback Nevin Lawson has been suspended one game for wielding a helmet during Oakland’s Week 17 loss to Denver, per Ian Rapoport of NFL Network (Twitter link). 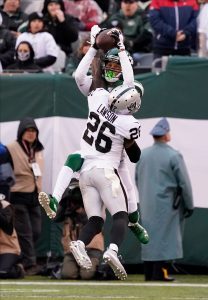 Since the Raiders aren’t in the playoffs, Lawson will have to sit out the first game of the 2020 season. Lawson was already suspended four games at the beginning of the season for taking a banned substance. He ended up appearing in 11 games for Oakland, making five starts. He signed a one-year deal worth just over $3MM with the Raiders back in March, so he’ll be a free agent again this spring.

Lawson was originally drafted by the Lions in the fourth round back in 2014. He spent the first five years of his career there, and became a full-time starter in Detroit for the last three. The Utah State product has started 50 games over the past four years and is still only 28, so even with the suspension he should draw some mild interest on the open market.