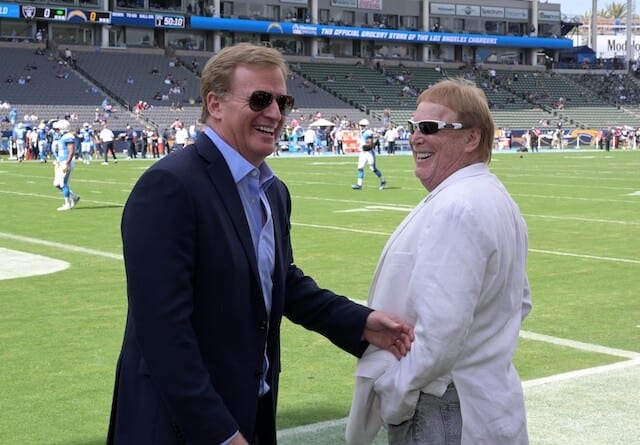 The NFL announced they have approved a 17-game schedule that will begin with the 2021 season.

NFL Commissioner Roger Goodell spoke on the change, noting that the longer schedule will aid in the league’s efforts to improve the fan experience and extend their reach globally.

“This is a monumental moment in NFL history,” said Roger Goodell. “The CBA with the players and the recently completed media agreements provide the foundation for us to enhance the quality of the NFL experience for our fans. And one of the benefits of each team playing 17 regular-season games is the ability for us to continue to grow our game around the world.”

The schedule will include a shortened three-game preseason slate as well as the addition of one interconference game. In a statement, the league provided more details regarding the final game of the season per Raiders.

The 17th game will feature teams from opposing conferences that finished in the same place within their division the previous season. The AFC was determined to be the home conference for the 17th game in 2021.

This has been a move in the making since the owners and the NFL Players Association agreed to the change last year, despite some grumbling and complaints from players. The change also comes after owners decided to expand the playoff format to include an additional team.

Of course, the addition of a 17th game means the NFL will be able to generate more revenue, a prudent move considering how much money was lost during the 2020 season due to the coronavirus (COVID-19) pandemic. The new season format will trigger a ripple effect regarding the rest of the offseason schedule, so it will be interesting to see how things play out in the next few months.