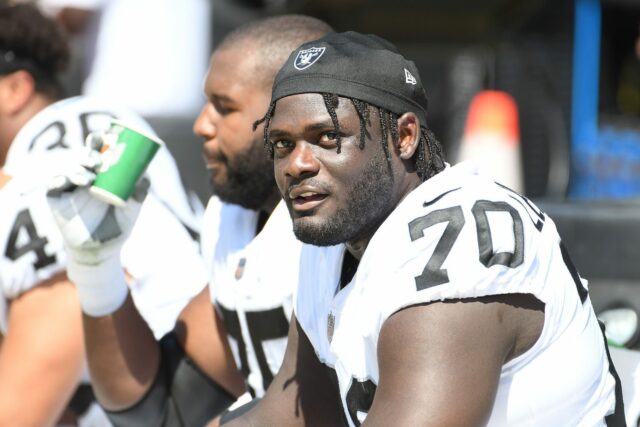 After a hot start to the season, the Las Vegas Raiders finally came back down to Earth as they lost to the Los Angeles Chargers, 28-14.

It was an uncharacteristic first half from the Raiders who struggled heavily to move the chains, a credit to the Chargers defense and Brandon Staley’s scheme. Las Vegas was able to respond in the third quarter, though, scoring twice in the period as Derek Carr and the offense finally began to get into a groove throwing the ball downfield. However, they failed to score in the final period and would eventually wind up with their first loss of the year.

The Chargers’ defensive line made a statement in the first half as they routinely generated pressure and forced Carr into errant throws. One player who particularly struggled was Alex Leatherwood, as he was called for a few penalties and failed to seal the edge on several pass rushes. Head coach Jon Gruden remains optimistic about Leatherwood’s development but did acknowledge there is improvement to be made.

“Well, look, he’s a work in progress,” Gruden said. “He’s competing. He does have some things to clean up, as we all do. But he’s mentally tough, he’s athletic. I think he’ll continue to get better and better the more he plays, but there is going to be some growing pains. He’s athletic, he’s long armed. He’s got some strength. We just got to have more consistency from everybody me included.”

Playing tackle at the NFL level is a difficult job, even more so for a rookie tasked with pass blocking for extended periods while plays downfield develop. As a result, much was made about the Raiders selecting the tackle in the first round, and the results have been uneven, to say the least.

Still, Leatherwood has shown some flashes, and his development will be key if the Silver and Black hope to right the ship, and fortunately, they get a good bounce-back opportunity in Week 5 against the Chicago Bears.