The 2021 NFL Draft is just two days away. This means five days from now, it will be done and all the Raiders’ draft picks will be in-house. Who will all those draft picks be? Glad you asked because this is my prediction for who the Raiders will select with their current eight picks in this draft.

I added a second option to each pick as well, which can sometimes be considered an option should picks ahead of that one go differently and other times is just another player who would also make sense should the predicted player be gone.

No position is in more dire need of attention right now for the Raiders than right tackle. The Raiders traded away Trent Brown and haven’t signed anyone to replace him.  In Jenkins, they get the best right tackle in the draft.

The 6-6, 317-pounder can plug right in at right tackle as a bookend to 2018 first-round pick Kolton Miller who signed an extension this offseason, giving the Raiders two starting tackles for at least the next five years.

Next up on the list of needs for the Raiders is safety. Free safety, in particular, is a key position in Gus Bradley’s defense. With right tackle being a more premium position and a great need, they wait until the second round to address safety, which is how it should be in this case. And they get a three-time first-team All-AAC selection who last season had three picks and 9 pass breakups in just nine games.

The Raiders dip back into the UCF talent pool, grabbing Grant secondary teammate, Aaron Robinson. He is probably the second-best nickel corner in this draft behind Washington’s Elijah Molden, so getting him in the third round is a great get. The former Alabama cornerback transferred to Central Florida after his freshman year.

In his final two seasons, he put up three interceptions and 20 pass breakups. Admittedly, getting Robinson at this pick might be a stretch, so I could see the Raiders trying to jump up to get him. Replacing Lamarcus Joyner at nickel corner has to be a priority for the Raiders in this draft. Robinson would compete with 2020 fourth-round pick Amik Robertson for the starting job going into the season.

With Cory Littleton, Nick Kwiatkoski, and Nicholas Morrow all under contract, linebacker isn’t an extreme need, but it shouldn’t be ignored either. And in this draft, if the Raiders don’t get one here, they would probably be looking at special teamers the rest of the way. In Cox, they get one of the better coverage linebackers in the draft.

You also won’t find a prospect with more experience with four seasons as a starter; three at North Dakota State, and one at LSU. And, in case you’re wondering, he played just as well in the SEC as he did in the MVFC.

It’s not a great class overall in terms of edge talent at the top, but there are some promising middle of the road edge rushers. This is about the latest the Raiders can expect to get one of those guys, so if they hope to land one, they must pull the trigger here.

Weaver is a great value in the fourth round. He missed the 2019 season with an ACL injury, but came back strong last season, putting up 7.5 sacks and 14.5 tackles for loss, earning first-team All-ACC honors. The 6-4, 259-pounder is a technician, more than a speed rusher, unlike his fell All-ACC edge-rushing teammate, Patrick Jones. Should Weaver be gone, Jones would be a nice consolation prize.

You won’t find a more versatile offensive lineman in this draft. Hainsey was a full-time starting right tackle the past three seasons for the Fighting Irish, earning second-team All-ACC honors. His short arms project him to guard in the pros, and he played well at center at the Senior Bowl, showing he can literally line up at any offensive line position if needed.

For the Raiders, he would immediately make for great depth across the line with future starting guard potential.

This 6-2, 350-pounder will clog any lane you put him in. Probably a couple of lanes. That’s what he does. He would come in and rotate with Johnathan Hankins in the middle for the Raiders, and could ultimately take over the bulk (so to speak) of the snaps in the middle.

Opting out of his senior season in light of Shelvin’s weight control concerns may not be to Mike Mayock’s liking, but we’re talking about the fifth round here. His talent would be worth a shot.

The late picks are where Mike Mayock likes to flex his draft muscles and get those perhaps lesser-known small school guys. While Arkansas State isn’t exactly Prairie View A&M, it is not an FCS school either. You take a chance on the most dominant receiver on the FBS level to see if maybe he could bring some of it to the pros.

Ranking the 15 best defensive tackles in the 2021 NFL Draft 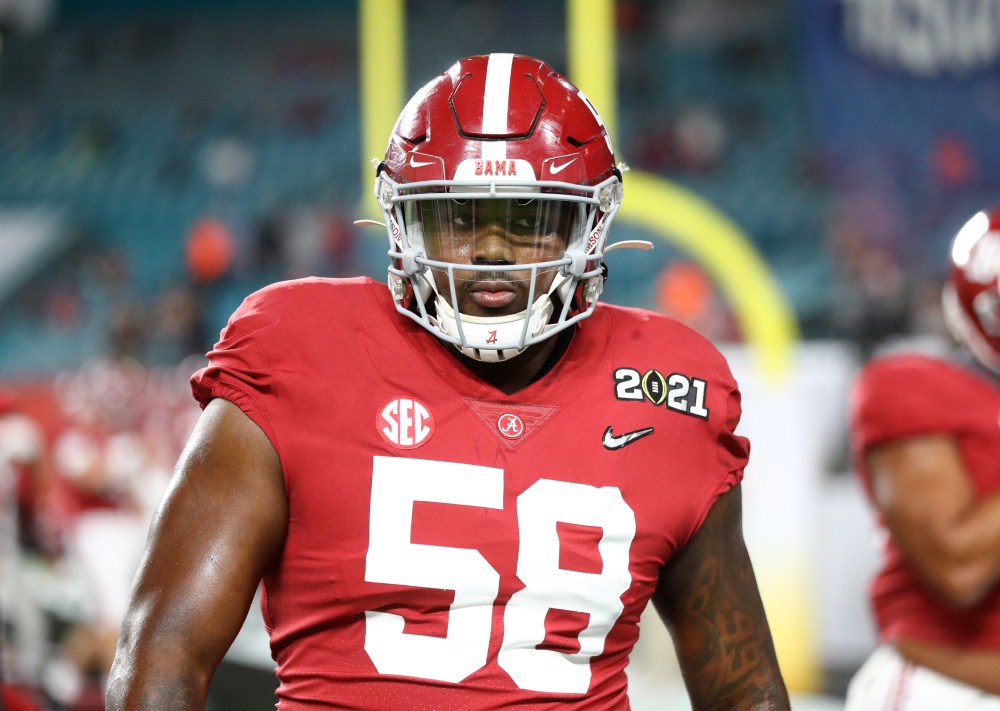