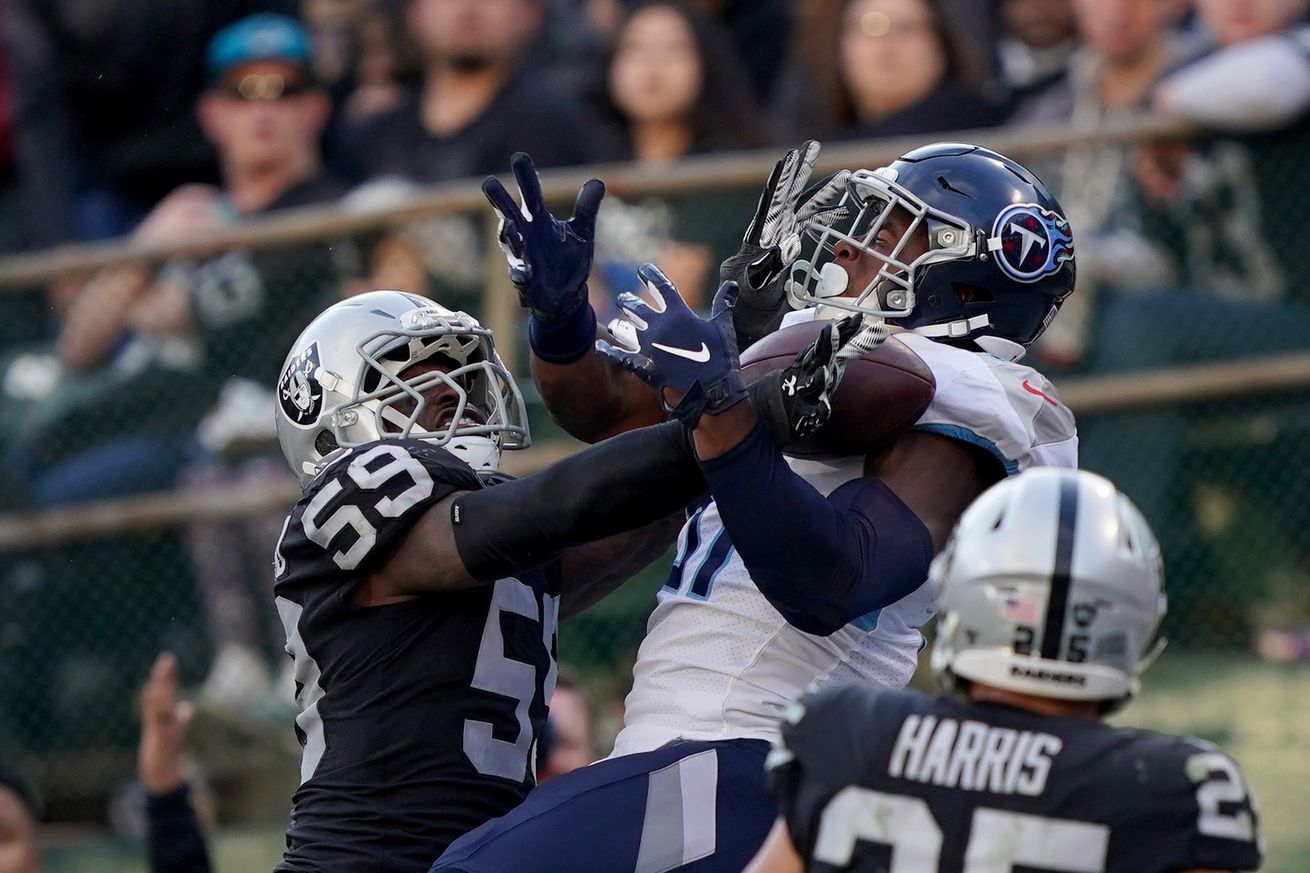 The biggest test facing the Raiders defense this weekend was stopping Titans RB Derrick Henry. Tennessee’s offense is built around what Henry does well and as a result of having such a bruising back, they run as much play action as anyone in the league. Ryan Tannehill has done a great job of taking what defenses are giving him and currently is averaging 9.8 yards per pass attempt — best in the NFL.

The defenders with the toughest job against play action are linebackers, and Tannehill picked on each of the Raiders linebackers with success in this game. The Titans QB completed 100% of his passes when the closest defender in coverage was a linebacker.

Here’s a look how the linebacking corps struggled in pass defense:

The Raiders used their 4-3 personnel often in this game as a way to match up with the Titans rushing attack. This means MLB Will Compton was on the field to begin the game. The Titans snuck one in on him, testing his eye discipline on this play action fullback pop pass. To Compton’s credit, this is an incredibly difficult play to defend and he does a great job putting himself in position to break this pass up. The Titans fullback simply made a better play.

Next up was Nicholas Morrow, who gave up a few catches for first downs. The Raiders are playing their standard split field zone coverage here with one difference. Usually, the Raiders prefer to run this coverage to the side that has the nickel corner playing the vertical hook while keeping Morrow and Whitehead keyed in on the backfield. For whatever the reason here, Morrow draws this coverage responsibility and the Titans are able to get away with a 39-yard swing, flipping the field and putting them in scoring position.

Whitehead had a characteristically poor game in coverage as well. I’m not sure what happened here for Whitehead to completely miss the TE and allow him to free release up the seam. Maybe he’s peaking into the backfield and the run action freezes him just long enough. One of my gripes with the Raiders scheme this year has been man coverage defenders looking into the backfield. Maybe this is the way they are taught, or maybe it’s poor discipline. Either way, there have been too many big pass plays to count when eye violations occur.

Then Whitehead surrendered this TD grab. Another brilliant call that is designed to confuse linebackers. This one is called a Leak concept and asks the TE to block down as if he’s blocking for a run before releasing up the opposite sideline. Whitehead recognizes the TE coming across his face and correctly turns and runs with him. The problem here is that Whitehead’s recovery speed isn’t good enough to make this competitive. Tannehill sees the back of the linebacker’s helmet and throws it up. Whitehead makes a great effort, but his physical limitations prevent him from making this a more competitive play.

These four plays alone contributed 122 of Ryan Tannehill’s 391 passing yards. If you take these four plays out, Tannehill has a much more manageable stat line: 17 for 23, 269 yards, 2 TDs, 1 INT.

Paul Guenther has gone on record saying he doesn’t value blue chip rookie LBs because he is confident he can develop under the radar players at the position. At this point, it’s fair to wonder how much development has happened under Guenther’s tutelage and if he’s the right man for the job.