Foster Moreau‘s season is over. On Monday, head coach Jon Gruden announced that the fourth-round tight end will not play again in 2019. 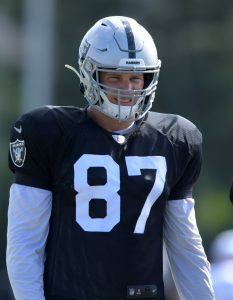 Moreau exited Sunday’s game against the Titans with a knee injury, and it’s serious enough to rule him out for the rest of the slate. Before the injury, Moreau hauled in three passes for 14 yards, including his fifth touchdown reception of the year. In total, he finishes out with those five TDs, plus 21 catches for 174 hard-fought yards.

Moreau didn’t have a gaudy stat line as a rookie, but he did develop a strong rapport with Derek Carr, who gave him more and more red zone looks as the year went on. He’ll look to build off of that in 2020, when it really counts – the Raiders are, for all intents and purposes, out of playoff consideration. Their 6-7 record means that they’ll need more than just one Christmas miracle to qualify, even if they run the table.

The Raiders – sans Moreau – will face the Chargers in Week 16. On the plus side, they might have rookie receiver Hunter Renfrow back in action.