The Raiders have hired Gus Bradley as their new defensive coordinator, per a club announcement. The former Bolts DC will take over for Paul Guenther, who was fired after a trying season in Las Vegas. 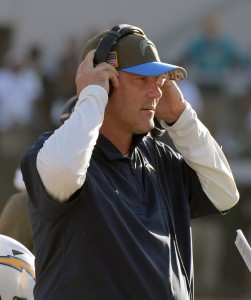 Bradley comes with 15 years of experience, including four years as the Jaguars’ head coach and another four as the leader of the Seahawks’ Legion of Boom. His history with Jon Gruden helped him land the job — his first pro gig was under Gruden as a defensive quality control coach in Tampa Bay.

Bradley’s defenses have ranked in the top 10 in each of the last two seasons. But, after Anthony Lynn got the heave-ho, a return to the Bolts was unlikely. With his guidance, four Chargers defenders earned Pro Bowl nods. That includes defensive ends Joey Bosa and Melvin Ingram III, who combined for 61.5 sacks under his watch.

There’s a lot of pressure on Gruden and GM Mike Mayock, who have yet to produce a playoff berth for the Raiders. Gruden is the only coach in the league who still has a job after failing to qualify in each of the last three seasons. Bradley, they hope, can help right the ship.