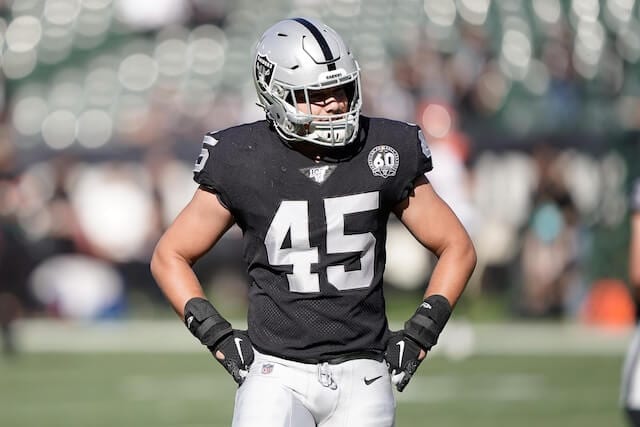 The Las Vegas Raiders made efforts to revamp the run game in recent years under head coach Jon Gruden.

This resurgence has largely been credited to Gruden and the emergence of running back Josh Jacobs. However, those on the team are well aware of Alec Ingold’s role in the offense.

At a time where the fullback position is considered to be on the verge of extinction, Ingold remains as one of the last of a dying breed. Fortunately, he has embraced being the unsung hero these days.

Ingold shared some high praise for his backfield mate in Jacobs and is looking forward to another year of clearing lanes in Las Vegas, via Tom Lamarre of SI.com:

“We love playing ball,” Ingold said of playing alongside Jacobs. “We’re competitors and we know what’s at stake. Josh is the mail carrier for this team and this organization and it’s no secret to anybody. The way that guy loves playing football and competing is why he doesn’t want to take a week off.

“Every opportunity we get on a Sunday is freakin’ gold. It invigorates you. It excites you. That’s what page we’re on in the running backs room. We love playing football.”

Ingold joined the Raiders as an undrafted free agent out of Wisconsin in 2019. He recorded a mere three carries for four yards and caught 12 passes for 110 yards and a touchdown last season.

While Ingold’s production does not translate to the stat sheet, there is no denying that he is one of the more integral members of the offense. His efforts paved the way for Jacobs’ to rush for a second straight 1,000-yard season en route to Pro Bowl honors.

This is made even more impressive because the offensive line was in a constant state of flux during the 2020 campaign. As a result, Gruden will be relying heavily on him once again as a stabilizing factor in the run game amid all the changes they made up front this offseason.

Most skill positions would not be content with such a limited amount of touches through their first two seasons. However, Ingold’s comments are indicative of the passion he has for his job and standing on the roster.

Having all their key players on board is certainly a good sign for the Raiders if they hope to kick things up a notch on offense in the 2021 NFL season.