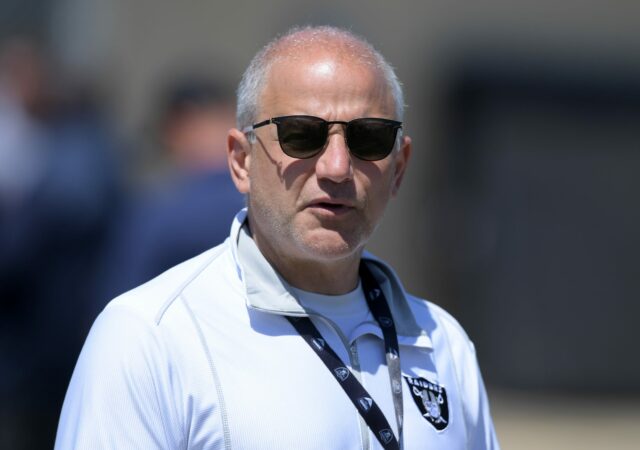 Las Vegas Raiders team owner Mark Davis announced that Marc Badain has resigned as team president and will be replaced by executive vice president Dan Ventrelle on an interim basis.

Badain started his career as an intern with the Raiders back in 1991. He eventually worked his way up, being named the team’s chief financial officer and an assistant to previous CEO Amy Trask.

Badain took over Badain as the team’s interim president following the retirement of Amy Trask back in 2013. He sed the interim tag in 2015 and played a key role in helping the team relocate to Las Vegas for the 2020 campaign.

Davis praised Badain for his efforts through the years and for helping the Raiders usher in a new era for the franchise.

“Today I have accepted Marc Badain’s resignation as president of the Las Vegas Raiders. Marc has been an integral part of the Raider family for 30 years, rising from a training camp driver to president of the entire organization,” Davis said. “His efforts in helping to build the most magnificent stadium the sports and entertainment capital of the world will never be forgotten. I wish Marc, his wife Amy, daughter Ali, and sons Bernie and Zach all the best in whatever the future holds.”

Davis also revealed Ventrelle as his replacement and the role he played in the team’s relocation.

“Dan has been with the Raiders for 17 years and currently serves as executive Vice President and general counsel. He has been a primary part of the stadium project from its inception, a liaison with state and local officials, a lead negotiator on football matters, and a leader on the business staff. His experience on both the football and business sides of the organization make him the best choice to lead the Raiders organization at this time. The greatness of the Raiders is in its future and the future starts now.”

It remains to be seen exactly why Badain has opted to resign from his post with the Raiders. After all, the opening of Allegiant Stadium just off the strip is considered a turning point for the franchise as they now get set to welcome fans in it for the first time.

Regardless, it just shows the efforts it took from certain individuals to make it come to fruition for the fans in the 2021 NFL season. All eyes will be on whether or not they can secure their first playoff bid since the return of head coach Jon Gruden.