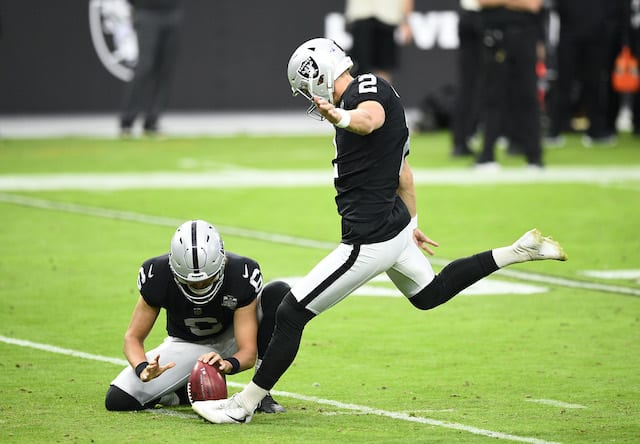 Las Vegas Raiders kicker Daniel Carlson was named AFC Special Teams Player of the Month for his contributions in December.

The month of December was a special one for him as in five games (with one at the beginning of January to close out the season included), Carlson made 14 of his 15 field-goal attempts and all 10 of his extra points.

It took a couple of years for the Raiders to figure out the kicking position after the departure of Sebastian Janikowski, but it looks like they have found their guy in Carlson, who is just 25 years of age. The same can be said of the punter position and AJ Cole after he had a strong 2020 season as well.

Carlson is not the only Raiders player to recently be recognized for his contributions on special teams as defensive end Maxx Crosby was named AFC Special Teams Player of the Week after blocking two field goals in the Week 17 win over the Denver Broncos.

While the 2020 season didn’t finish how the Raiders had hoped, it is clear that this team has some quality pieces to build around moving forward. After another offseason with additions through the draft and free agency, the expectation will be for Las Vegas to return to the postseason in 2021.