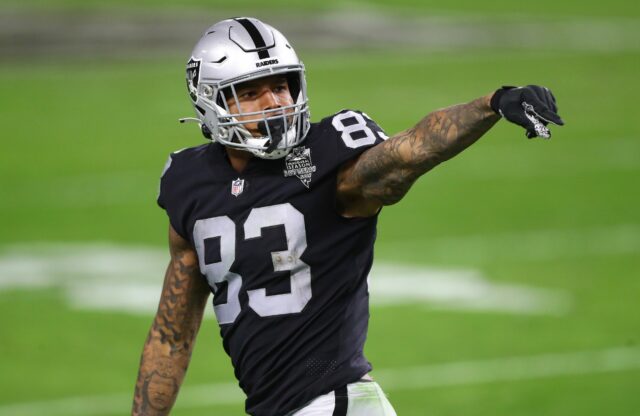 The Las Vegas Raiders had one of the best offseasons of any team as they added several impact players to help them in their quest for a Super Bowl.

The Raiders swung deals for Chandler Jones and Davante Adams, adding two pivotal pieces to the defense and offense, respectively. Las Vegas also managed to get extensions done for key players like Derek Carr, Maxx Crosby, and Hunter Renfrow to ensure they have their core players around to compete for the foreseeable future.

As the Raiders report to training camp, there are still some questions about the futures of Darren Waller and even Denzel Perryman. According to Ian Rapoport of NFL Network, both veterans are seeking new deals:

From NFL Now: The #Raiders veterans reported today, joining their rookies as practice is set for tomorrow. A few things to keep an eye on… pic.twitter.com/wEz950X0Lu

Waller and Las Vegas’ front office have been in talks on a possible extension throughout the offseason. He would take priority as he has clearly outplayed the current four-year, $29.8 million extension he originally signed in 2019. Waller’s turned himself into one of the biggest mismatches in the NFL with his size, speed, and athleticism and should serve as a fulcrum for the offense yet again.

Meanwhile, Perryman is coming off a successful first year with the Raiders, where he earned his first Pro Bowl nod after leading the team in tackles with 154. Perryman provided reliability and sure-tackling at the linebacker spot, and he would be another useful addition should the two sides come to an agreement.

So far, the fact that both sides reported for camp is a good sign and should mean that their respective extension negotiations will not be a distraction.