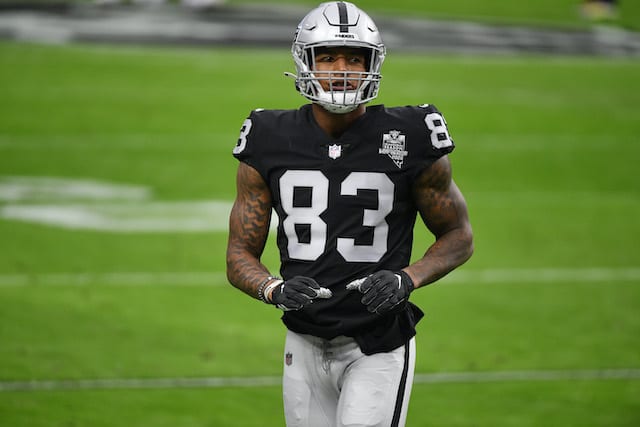 Although it was a disappointing 2020 NFL season for the Las Vegas Raiders, tight end Darren Waller provided a silver lining with his spectacular play.

Waller put the finishing touches on a historic year by hauling in nine receptions for 118 yards in the 32-31 win over the Denver Broncos in Week 17. With it, he managed to break the record set by Hall of Fame wide receiver Tim Brown for the most receptions in a season in franchise history.

Waller has come a long way in his journey to emerging into one of the best tight ends in the NFL. Regardless, it seems to be just the beginning for him.

Being mentioned in the same company as a legend like Brown certainly carries plenty of weight around the organization. This is something that head coach Jon Gruden is all too familiar with, per Levi Edwards of the team’s official website:

“I know Tim Brown; I have a great history with him, and I know how unbelievable of a player he was,” said Coach Gruden. “When you start throwing around Tim Brown’s name, and you’re saying you’re breaking Tim Brown’s record, you’re in rare territory.”

Waller added that he is still far from enjoying his best days in the Silver and Black:

“I would say there’s a lot more to come,” said Darren Waller. “I’m definitely grateful for this moment, but I don’t want this to be my greatest day as a Raider. I want us to keep going, and I want our team to have great days as well and just to keep going from here. So I feel that this is definitely a great thing, but I want to keep going.”

There was not much for Gruden and the Raiders to hang their hat on after suffering another second-half collapse in the season en route to missing the playoffs. Fortunately, the career year from Waller gives good reason to be optimistic that this offense can take that next step with him as a focal point.

Waller’s comments indicate that he still has high expectations for himself moving forward, which should help light a fire under those on the team that may have fallen short of expectations this year. The prospect of him finding a way to build on his numbers from this year is a scary thought for opposing defenses in the 2021 NFL season.

For now, Waller can relish in being immortalized alongside Brown for his efforts this year.