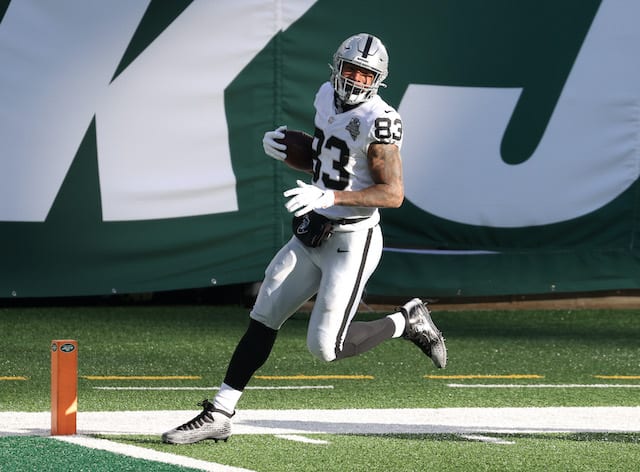 The Las Vegas Raiders are poised to have one of the most exciting offenses in the 2021 season as they have a deep receiver corps to go along with a dynamic running game.

Henry Ruggs III, Bryan Edwards, John Brown, and Hunter Renfrow headline the wide receiver group, while Josh Jacobs and Kenyan Drake will man the backfield as a formidable one-two punch. However, the real star of the offense is Darren Waller, who has quickly established himself as one of the premier tight ends in the NFL.

After overcoming a troubled start to his professional career, Waller was able to turn things around and make a name for himself after signing with the Raiders. After an eye-opening 2019 season, Waller dominated the 2020 campaign as he recorded 107 receptions, 1,196 receiving yards and nine touchdowns.

With the Las Vegas roster working hard to get ready for the upcoming season, Waller decided to show off his athleticism on his Instagram account:

Even though Waller plays tight end, he is more of a wide receiver as his elite route running, and downfield speed makes him a mismatch for opposing linebackers. He can also take advantage of safeties and corners because of his size and physicality at the line of scrimmage, which enables him to make plays no matter where he is lined up.

Head coach Jon Gruden has the luxury of using Waller in a variety of ways and opening up the full extent of the playbook. For Derek Carr, Waller is a reliable receiving option when the pocket breaks down and is almost a sure-fire way to extend drives.

Even though defenses know that Waller is the focal point in the passing game, there are limited ways to truly guard him. The Silver and Black should be a force on offense, and it will be fun to see if Waller can replicate his past success.