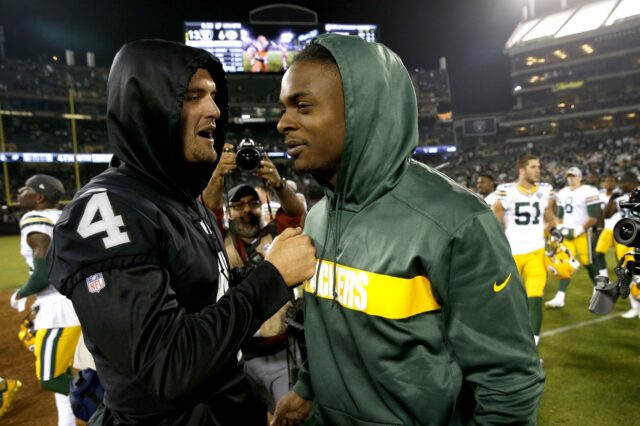 Although most of the attention surrounding the Green Bay Packers has been focused on quarterback Aaron Rodgers, the future of wide receiver Davante Adams also remains uncertain at best.

Adams is entering the final year of his contract in the 2021 NFL season. Given the ongoing turmoil with Rodgers, this has led to plenty of speculation regarding what his favorite wideout plans to do in the near future.

Despite looking for a lucrative payday, Adams has not been shy about expressing his interest in reuniting with quarterback Derek Carr. After all, the pair enjoyed plenty of success during their college days at Fresno State.

Adams opened up about his close relationship with Carr during an interview with ABC 30 and even toyed with the prospect of them being teammates once again, via John Breech of CBS Sports:

“I love Derek to death,” Adams said. “We’ve got a great friendship and we still communicate really, really consistently. He’s one of my best friends. Obviously, it would be a dream to be able to play with him, but I’m a Packer now. Until that point when we make that decision, I guess we just got to, we’ll see what happens.”

Adams’ willingness to speak out on a potential reunion with Carr is indicative of the uncertainty surrounding his situation in Green Bay. Of course, most players would downplay such talks with training camp steadily approaching, but it is clear he has no problem addressing the possibility.

It is safe to say that the Packers’ quarterback situation will be monitored closely by Adams and his camp. Should Rodgers finally make his way out in the near future, it will have a major impact on how other key players see their future with the team.

Even if Green Bay is willing to re-sign Adams for top money, he could be better off jumping ship and reconnecting with a quarterback that he already has a healthy rapport with Carr. Given the Raiders’ efforts to revamp the receiving corps in recent years, they would be all in on giving a player of his caliber his due to bring him over.

Carr and Adams connected 233 times for 3,031 yards and 38 touchdowns in two seasons during their time at Fresno State. The latter averaged 116.5 receiving yards per game, with Carr under center.

The Raiders will likely land as a frontrunner for his services if he ultimately opts to walk after this season.

The post Raiders News: Davante Adams Says ‘It Would Be A Dream’ To Reunite With Derek Carr appeared first on Raiders Newswire.