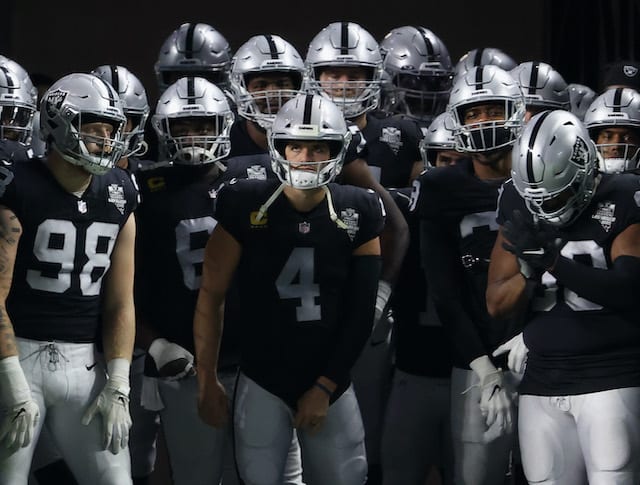 The Las Vegas Raiders once again fell vastly short of expectations by missing the playoffs during the 2020 campaign.

The Raiders got off to another hot start at 6-3 midway through the season. Quarterback Derek Carr and the offense managed to click on all cylinders with a well-balanced attack.

Unfortunately, history repeated itself as they stumbled to the end by losing five of their next six to finish 7-9. However, while it was a disappointing end to the year, Carr did manage to find a few silver linings.

The Raiders have managed to make a few splashes on both sides of the ball this offseason. Carr said during an appearance on “Brother from Another” that these additions will help put this team over the top in the 2021 NFL season:

“We were three or four plays away from having 12 or 11 wins,” Carr said. “Like, literally three plays. And it’s like, we’re so close. Especially, we feel so confident on the offensive side with all the weapons that you mentioned and all those kinds of things. Now adding coach Gus Bradley and Yannick and the different guys that we’ve added to our defense, I mean, we’re kind of excited — to say the least. So we’re really looking forward to the season.”

There is no question that the Raiders managed to shoot themselves in the foot time and time again with costly mistakes. Although Carr’s comments may be somewhat far-fetched, it is indicative of this team’s confidence going into this season.

Las Vegas did drop a couple of nail-biters down the stretch versus the Los Angeles Chargers and Miami Dolphins. While they did suffer a comeback loss versus the Kansas City Chiefs in Week 11, their track record with such games last season indicates it may have taken more than one or two plays to pull off.

At the same time, the Raiders also benefitted tremendously from a terrible coverage call by the New York Jets that allowed wide receiver Henry Ruggs to score the game-winning touchdown. They also managed to pull off a major gamble with their do-or-die two-point conversion versus the Denver Broncos in the season finale.

Regardless, Carr still has good reason to be optimistic that Las Vegas will be able to turn their fortunes around. The front office added even more weapons to his arsenal while filling some of the notable voids on defense.

All they need now is for the ball to bounce their way more than it did last year.