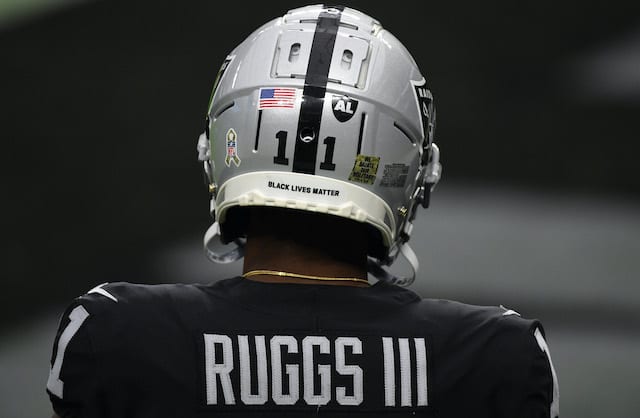 The Las Vegas Raiders generated some hype for their passing game around quarterback Derek Carr last offseason by taking Henry Ruggs No. 12 overall as the first wide receiver off the board in the 2020 NFL Draft.

Meanwhile, the emergence of third-round pick Bryan Edwards in training camp resulted in plenty of hype around the pair of rookies. Unfortunately, both players fell vastly short of expectations as Carr relied heavily on his other options to put together a career year.

Now that the offense has had a full offseason together with the new pieces, it appears there is a newfound sense of optimism. However, all eyes will be on whether or not Ruggs has made the necessary strides in his development to be successful in the 2021 NFL season.

Fortunately, it seems Carr is impressed with his growth going into Year 2, via Vincent Bonsignore of the Las Vegas Review-Journal:

“Man, he’s been impressive,” Carr said. “The way he’s running routes. He’s being violent in his cuts. I think something clicked in his head. Just like with everybody, you play a season in the NFL, you go back and watch the tape and you’re like “Wow, I know what it takes now.” And you either do it or you don’t. And he’s showing already that he said,”Nah, I’m going to do it.” And it’s been so impressive.”

Carr feels that Ruggs had to overcome a lot to do what he did last year and feels the experience will help pay some dividends this time around.

“Even what he did last year, with no OTAs, was impressive. Maybe he didn’t have a breakout season, a thousand-yard season or anything like that. But things he did for us in certain moments, it was impressive. So now he knows the offense, he knows the quarterback, he knows who’s around him, all those things. He’s working with me after practice. I’m very excited for Henry. Now he’s gotta go do it.”

It is certainly encouraging to see that Carr is excited with what he has seen from Ruggs this offseason. However, while other teammates and coaches alike have praised his development, the endorsement from the quarterback will make the biggest impact.

The Raiders managed to shore up some much-needed experience in the receiving corps with the arrival of John Brown and Willie Snead in free agency. Regardless, Ruggs is expected to fill the void left by Nelson Agholor as a go-to option for Carr alongside tight end Darren Waller this season.