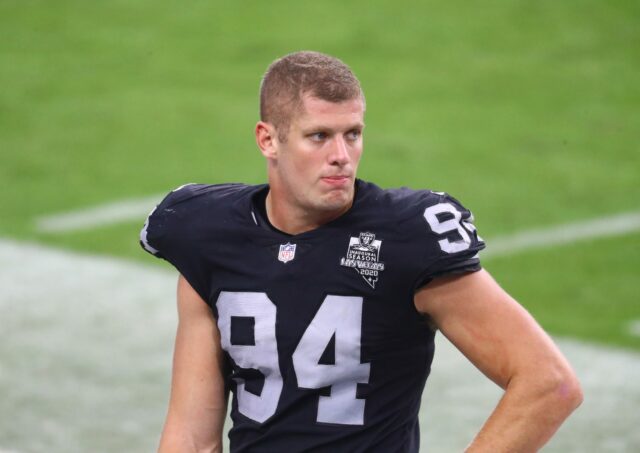 Although the Las Vegas Raiders have struggled to get back into the playoffs, the franchise is in good hands with Derek Carr as its quarterback.

Carr has been a constant for the Raiders, and one of the primary reasons is his leadership off the field. As a result, the signal-caller is well-respected in the locker room and can get the buy-in and support from his teammates.

So it was no surprise that Carr was one of the first members of the team to reach out to Carl Nassib after he came out as gay. According to Levi Edwards of Raiders, Carr was shocked at the announcement but made sure to let Nassib know he had his back:

“He’s my teammate, he’s my brother,” said Carr. “At first, I was shocked because I didn’t know. He never talked about it to any one of the teammates. His moment was when he grabbed his phone and did it that way. And I called him. He was working out, so I texted him. And he sent a text right back. And he said, ‘Derek, you have no idea how much it meant to me for you to reach out.’ He said, ‘I was hoping that you would reach out.’

Carr and Nassib have been teammates for a couple of seasons now, but this goes to show that the quarterback is willing to go above and beyond for one of his teammates. Great leaders are the ones who can connect with everyone, and Carr has that ability in spades.

Nassib’s announcement was well-received in the Raiders organization, and Carr’s words are a perfect example of how a franchise watches out for one of their own.

The post Raiders News: Derek Carr Opens Up About Reaching Out To Carl Nassib appeared first on Raiders Newswire.