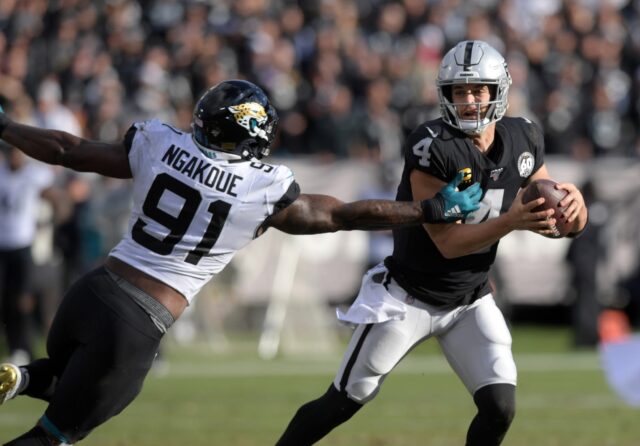 Although the Las Vegas Raiders will once again rely on quarterback Derek Carr to maintain the offense, they are looking to a new face to lead a potential resurgence on the other side of the ball in defensive end Yannick Ngakoue.

The Raiders have high hopes for a revamped pass rush outside of Maxx Crosby and Clelin Ferrell. Head coach Jon Gruden made it no secret that Ngakoue will be the one tasked with leading the way with his consistency.

The former Pro Bowler has wasted no time making a solid impression on his new coaches and teammates through early offseason workouts. His efforts have not gone unnoticed by Carr.

Ngakoue underwent quite a transformation by bulking up to 258 pounds this offseason. Carr is admittedly impressed with the performance he has put on so far.

“I know it’s just been today, but Yannick [Ngakoue], my goodness. Wow,” Carr said. “What a guy. I sit there and I’m like, ‘He’s 26-years-old? Oh my goodness. This is good for the Raiders.’ Obviously, the guys that have been here, I’ll just say this as a whole, I think the whole defense looks great. I’m really excited to see what they do this season. Very, very excited to see what [defensive coordinator] Coach Gus Bradley and his staff brings because I’ve played against them, I know what it’s like. Very excited to see what happens this year, but again, we have to go prove it. But Yannick definitely popped today. When he steps on the field, there’s certain guys in football that when they step on the field and they do something, you’re like, ‘That’s a different level.’ He definitely has that about him.”

Ngakoue has seemingly made the most out of his fresh opportunity in Las Vegas. Not only is he reunited with a familiar face in defensive coordinator Gus Bradley, but he has also embraced that challenge that has come with his arrival.

Ngakoue has quietly established himself as one of the most consistent pass rushers in the league, with at least 8.0 sacks in each of his five NFL seasons. This included a stellar rookie campaign under Bradley’s tutelage with the Jacksonville Jaguars when he recorded 8.0 sacks and four forced fumbles.

However, Ngakoue has made it clear with his bulked-up physique that he may contribute more as a three-down player for the Raiders. The praise from Carr indicates that he is well on his way to doing so.