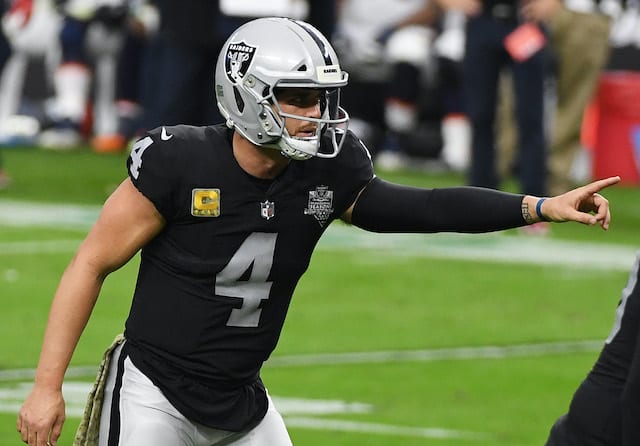 The Las Vegas Raiders have a chance to make yet another statement against the Kansas City Chiefs at home in Week 11.

The Raiders managed to escape with a clutch 40-32 win back in Week 5 and were not shy about relishing in the victory given their past struggles at Arrowhead Stadium. The matchup featured quite a showdown under center with Derek Carr out-dueling Patrick Mahomes.

Of course, it is safe to assume that Las Vegas is not looking to get in another shootout with one of the NFL’s premier arm talents. Fortunately, the offense is not in a position where it is forced to make a choice.

The Raiders have featured a healthy balance of run and pass throughout the course of the 2020 NFL season. Carr is prepared to do whatever he must in order to ensure another victory over their AFC West rivals, via Levi Edwards of the team’s website:

“There’s a certain level each time a play is called, whether it’s a run or pass, I have a job to do,” said Derek Carr. “If I’m doing that at the highest level possible, I’m helping my team win.

“Now, there have been times against the Chiefs where it has been shootouts. I’ve done it against Alex [Smith], with Patrick [Mahomes], and there’s been games like that. There’s also times where the running game is there, so it just really depends. Whatever we have to do to win, that’s what I’m ready to do.”

Carr is in the midst of one of his best career seasons after throwing for 2,156 yards, 16 touchdowns, and just two interceptions through nine games. There is no question that the new dosage of firepower on the outside has clearly helped pay some major dividends under center.

Regardless, Carr is well aware of the benefits that come with establishing a strong ground game, which is exactly what they have done with the seventh-most rushing yards per game (139.2). The efforts of running back Josh Jacobs have served as the ideal complementary option to the passing game and they are looking to take full advantage once again versus the Chiefs.

Despite the improvements to the offense in Las Vegas, they are still not on the same level as their divisional rivals in terms of productivity. As a result, the onus will fall on the defense to once again step up and prevent Mahomes and Co. from ever truly established listing their rhythm.

The post Raiders News: Derek Carr Ready To Do Whatever It Takes To Earn Win Over Chiefs appeared first on Raiders Newswire.