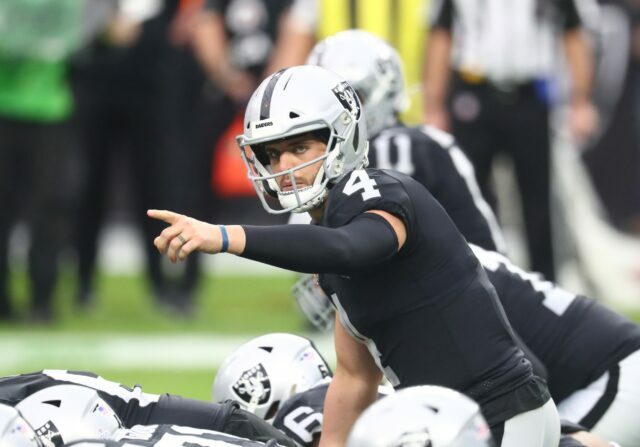 Although the Las Vegas Raiders experienced some major turnover this NFL offseason, they managed to alleviate it with some notable additions to the offense.

Head coach Jon Gruden and general manager Mike Mayock made it clear that they were all in on quarterback Derek Carr leading up to the 2021 NFL season. As a result, they followed it up by concentrating their efforts on shoring up some more firepower in his supporting cast.

Las Vegas filled the void in the receiving corps left by Nelson Agholor by bringing in John Brown and Willie Snead IV. They also formed a potential 1-2 punch in the backfield after adding Kenyan Drake as a commentary option to Josh Jacobs.

While the new faces make for a surplus of weapons on paper, the Raiders have a whole offseason to find a way to make it work. Regardless, Carr is admittedly excited for the new weapons at his disposal.

“Yeah, I think that they bring some good football in their background,” Carr said. “I think they bring a hunger, a desire to win, which is great. I really feel that we’ve been over the last few years getting guys that have this hunger and desire to win. We’ve been progressing, not at the rate we want to but we’re progressing and hopefully we take another jump. But adding guys like this only helps that. Willie is another guy, great football player, physical. Really strong hands. Reminds me of [Michael] Crabtree’s strong hands. Real strong hands, very physical football player. I’m excited to see him when the pads come on.”

It is easy to see why Carr is looking forward to what this group brings to the table. He has become accustomed to working with the influx of young talent in recent years like Jacobs and wide receivers Henry Ruggs and Bryan Edwards.

Carr will now be joined by other proven veterans whose experience can help pay some major dividends to their younger teammates. Brown is already excited to play his part in helping this group take that next step.

Meanwhile, Drake has embraced utilizing his versatility as a change-of-pace option to Jacobs. Given his recent stretch of production, there is good reason to be optimistic about the new personnel.

The onus will ultimately fall on Carr and Gruden to make it come to fruition at Allegiant Stadium this season. It will be interesting to see which of these new faces will emerge as go-to options for him.