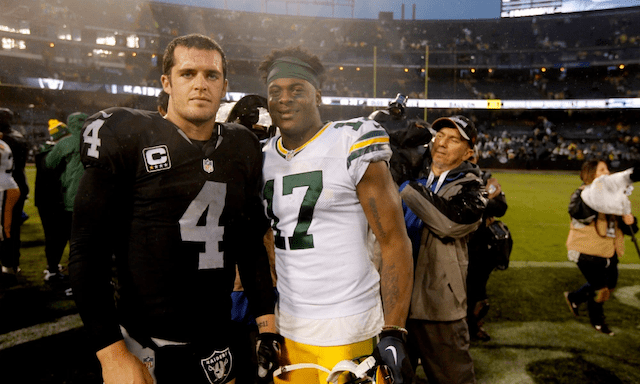 Adams is entering the final year of his current deal going into the 2021 NFL season. While the Packers would be wise to give a player of his caliber a well-deserved payday, there is still plenty of uncertainty regarding the future ion quarterback Aaron Rodgers.

There is no question that Adams would have his fair share of suitors should he decided to hit the open market next offseason. Fortunately, his connection to the Raiders may give them the edge they need to make a splash in free agency.

Carr is admittedly excited about the prospect of reuniting with Adams and made it no secret that his recruiting hat will be on if the time comes, via Bryan DeArdo of CBS Sports:

“I’ve learned in this business [that] you never shut a door on anything,” Carr told ABC’s Bri Mellon. “He’s the best receiver in the NFL. The guy’s unbelievable. He’s been one of my best friends since we’ve been in college together. I love the guy. … I would always welcome playing with him again. I think it would unlock some things in both of us that people haven’t seen yet. I’m always open to that, and I will be recruiting very hard. When that time comes, that will be a full court press.”

Carr’s interest in Adams is certainly understandable given their history as teammates at Fresno State. Of course, his status as one of the best wideouts in the league would make for an ideal addition to a team that has made concerted efforts to revamp their passing game in recent years.

While several potential suitors will be shooting their shot at Adams in free agency, it appears there is a sense of mutual interest with the Raiders. He detailed his close relationship with Carr and their past success as teammates in college as a potential ‘dream’ scenario for him.

The pair combined for 233 receptions, 3,031 yards and 38 touchdowns in two seasons during their time at Fresno State. There is good reason to be optimistic about their potential numbers if they were reunited at the next level.

For now, both sides have their obligations for the 2021 campaign. Adams will be closely monitoring the situation with Rodgers in Green Bay while Carr looks to make the most out of this new-look receiving corps.