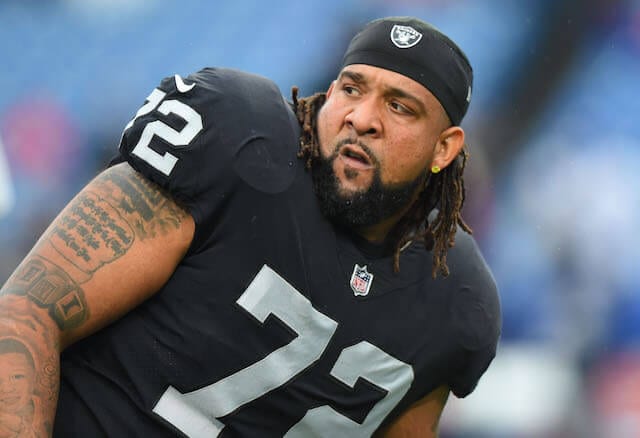 The Las Vegas Raiders have a laundry list of notable voids to fill on their roster if they hope to bounce back in the 2021 NFL season.

They opted to make some cost-cutting moves by releasing guard Richie Incognito and defensive back Lamarcus Joyner. They also made headlines with their decision to trade left tackle Trent Brown back to the New England Patriots in exchange for a 2022 fifth-round pick and a 2022 seventh-round pick.

In the midst of all these moves, the Raiders have also made sure to do right by one of their own. As a result, it appears former left tackle Donald Penn will be coming back to town.

According to Josh Dubow of the Associated Press, Penn will sign a one-day contract to retire with the team:

#Raiders sign Donald Penn to one-day contract so he can retire with the team. Penn was a great signing in 2014 (2 years, $10.4M). He was key part to a dominant OL, made 2 Pro Bowls in 5 seasons and was a locker room leader

Penn entered the NFL as an undrafted free agent before he was picked up by the Minnesota Vikings. Following a brief stint in Minnesota, he etched out an integral role for himself with the Tampa Bay Buccaneers, where he spent the bulk of his career.

Penn signed a two-year deal with the Raiders heading into the 2014 season as part of their efforts to rebuild the offensive line. Their plan worked as he was one of three Pro Bowl offensive lineman on the team during the 2016 campaign. They also made the playoffs that year at 12-4 thanks to the o-line after they tied for the top spot by allowing just 1.2 sacks per game.

While Penn spent just five of his 13 NFL seasons with the Silver and Black, it is evident that this was the favorite part of his career. Although his time in Oakland may have ended unceremoniously due to an injury-riddled year in 2018, both sides have made amends with this one-day deal.

Penn has already offered up some assistance on the recruiting process for the new-look offensive line. Penn suggested that free agent guard Kyle Long would make for an ideal fit in Las Vegas.