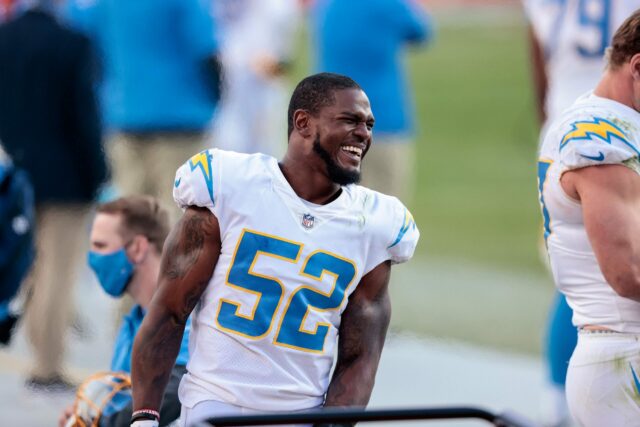 As the Las Vegas Raiders prepare for the 2021 NFL season, Jon Gruden and company are trying to prepare their defense for the grind of the 17-game regular season.

On Wednesday, the Raiders reportedly made a trade with the Carolina Panthers to acquire linebacker Denzel Perryman. This move will reunite Perryman with Raiders defensive coordinator Gus Bradley, who is excited about what the linebacker will bring to Las Vegas.

“Denzel, we have a lot of history with him just from our time back with the [Los Angeles] Chargers,” Bradley said. “He’s a very good leader, very good pro. He brings some explosiveness to us. He’s got very good instincts; he understands the package and what is asked of him. So, we just need to create some more depth there because of some of the situations we’ve been in. Healthy and come back in and able to play, he’ll be a good addition. I think he’ll fit in well with that group too.”

Following the announcement that linebacker Nicholas Morrow would miss some time due to a foot injury, a move was expected by the Raiders to help fill the void. Adding Perryman will give Las Vegas some insurance at the linebacker position. The relationship with Bradley bodes well for him potentially getting some playing time and having a decent role on the squad.