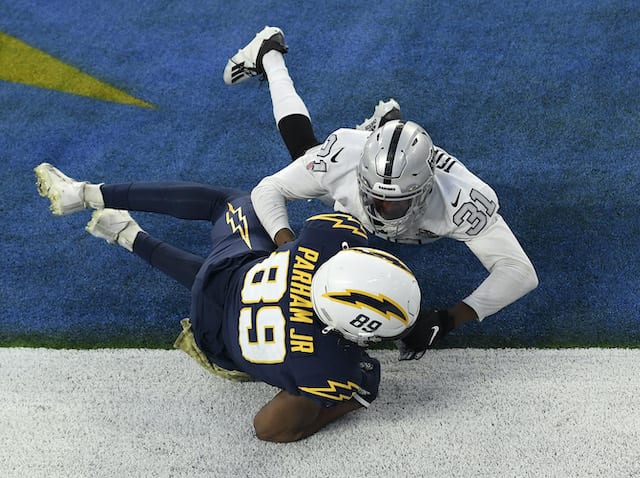 For a moment, it appeared as though the Los Angeles Chargers had pulled out a last-second win over the Las Vegas Raiders in Week 9.

Chargers quarterback Justin Herbert found tight end Donald Parham Jr. in the end zone for what looked like a game-winning touchdown. The initial ruling that it was a catch sent Chargers’ players in a frenzy.

They were not the only ones celebrating though as Raiders cornerback Isaiah Johnson, who was the defender in coverage, also got in on the action. It turns out he had good reason to be excited after the play was overturned after a lengthy review and the Raiders secure the 31-26 victory.

Johnson was only in because of an injury to Trayvon Mullen, but he made some great plays, including the game-winner to help earn the victory. In his first real taste of NFL action, the second-year cornerback described what he saw in the last couple of plays that he was targeted on, via Kyle Martin of Raiders.com:

“Knowing that I haven’t had the opportunity to put that many snaps on film and they haven’t really seen me — it’s a rookie quarterback — he’s a great quarterback by the way — then you’ve got Mike Williams and their biggest tight end come and line up on me? Yeah, absolutely, within the red zone I [knew what was] coming.”

It was certainly a big night for Johnson considering he had already managed to save the day by preventing wide receiver Mike Williams from making a touchdown grab just the play before. His performance in the clutch proved to be the deciding factor in securing the Raiders’ second straight win.

For the Chargers, it is only further evidence of the heartbreaking fashion that they tend to lose in on a weekly basis. Every single one of their losses so far in the 2020 NFL season have come by one score and they now find themselves on the outside looking in when it comes to the AFC West.

Meanwhile, the Raiders have managed to take care of business on the field at 5-3 despite all the setbacks they suffered amid the coronavirus (COVID-19) pandemic. This is thanks in large part to the efforts of surprising, key contributors like Johnson when they need it the most.

Las Vegas has a chance to make some waves with divisional matchups against the Denver Broncos and Kansas City Chiefs in the coming weeks.

The post Raiders News: Isaiah Johnson Describes What He Saw In Final Couple Plays In Win Over Chargers appeared first on Raiders Newswire.