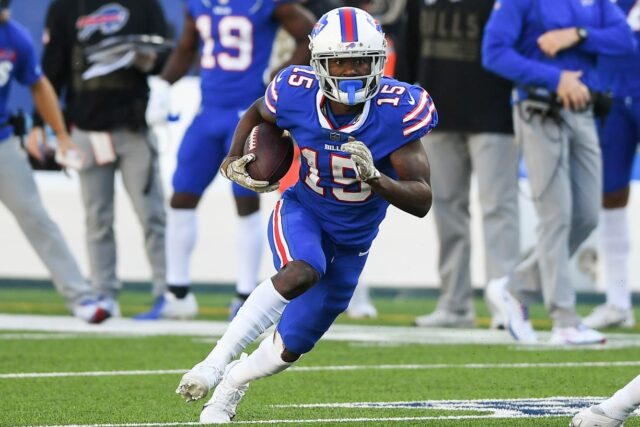 The Las Vegas Raiders have high hopes for the additions they made on offense leading up to the 2021 NFL season.

The arrival of Snead and Brown helped to alleviate the departure of wide receiver Nelson Agholor in NFL free agency. In fact, it appears the latter’s likeness has already helped make him a suitable replacement.

Carr spoke on the similarities between Brown and Agholor while also touching on his newfound fandom of the Golden Knights in Las Vegas.

“Yeah, so one, I’ll probably talk about ‘Smoke’, John Brown,” Carr said. “I think we will all get use to calling him ‘Smoke’. ‘Smoke’, awesome person, great teammate. Reminds me a lot of Nelson [Agholor]. Very fast, very smart, works hard. But he’s a great person just like ‘Nelly’. I think that they are very similar players. So, sad to lose Nelly – love him and wish him the best. Love the guy so much, but happy to get ‘Smoke’ here. Love that guy. Great relationship with him already. And the Knights, I was at the game last night. Took my boys. My boys are huge hockey fans now, so I’m learning the rules as we go. But I’ve loved it. It’s just fun to watch other people play at a high level and just to feel the city’s energy, the support for our team has been really cool. I’ve gotten to know some of those players and just want to continue to support those guys. Our city has been great in doing that, so hopefully they can keep it up. They’ve been doing great.”

Although it is encouraging to see Carr hitting it off with his new teammates, the Raiders are hoping that Brown will share the same qualities that Agholor did on the field as well.

After all, Agholor emerged as the No. 1 option in the receiving corps for Carr in a season where rookies Henry Ruggs and Bryan Edwards were still finding their footing. Las Vegas is now looking for one of these players to step up as a solid complementary option to tight end Darren Waller in the passing game.

Fortunately, there is good reason to be optimistic about what Brown can do for this offense. While injuries may have led to a down year in 2020, he is still just one season removed from a stellar 2019 campaign with the Buffalo Bills that saw him register 72 receptions for 1,060 yards and six touchdowns.