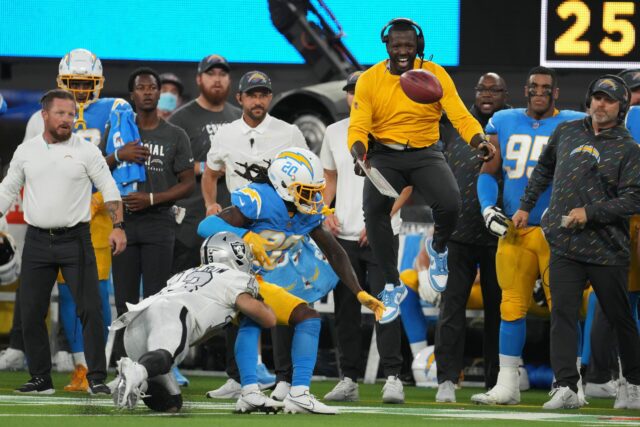 In a highly-anticipated AFC West showdown, the Las Vegas Raiders, unfortunately, fell short against the Los Angeles Chargers and ended their reign as one of the NFL’s last remaining undefeated teams.

It was an offensive struggle throughout the first half as the Raiders were completely shut out by the Charger defense. Los Angeles generated pressure throughout the half, while the secondary made sure the Las Vegas pass catchers had no space to operate.

Even though the Raiders did not score early on, Hunter Renfrow was able to wake the crowd up after he came up with a huge tackle on a Charger fake punk. It was a big hit that robbed L.A. of a first down, and head coach Jon Gruden could not help but gush about it.

Darren Waller and Henry Ruggs have understandably drawn the most attention among the Silver and Black, but Renfrow continues to serve as a reliable player whenever he is out on the field. His play on special teams was another example of his football IQ, and it is no surprise that he continues to see plenty of snaps each week.

Renfrow would later come through again for Las Vegas as he scored the team’s first touchdown of the evening on a slick route that has quickly made the rounds online. He finished the day with six receptions for 45 receiving yards and a score, proving he is still very much involved offensively.

Although the loss is disappointing, the Raiders have shown the ability to fight and climb back into games though that might not be necessary when they take on a struggling Chicago Bears squad in Week 5.