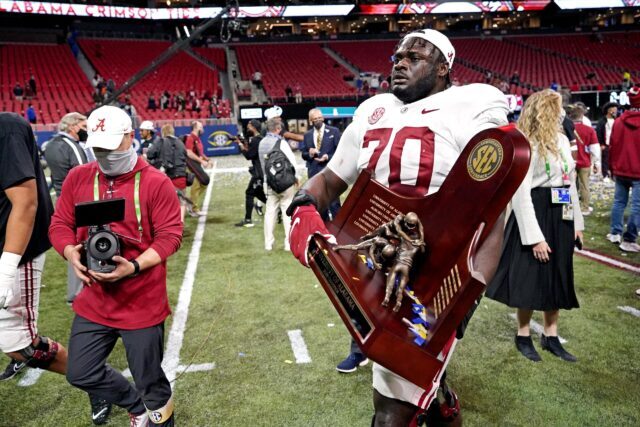 The Las Vegas Raiders are going to look vastly different up front during the 2021 NFL season as they opted to revamp their offensive line to free up their cap situation.

Out are steady veterans in Rodney Hudson, Gabe Jackson, and Trent Brown, and they will be replaced in unproven players such as Andre James, Denzelle Good and John Simpson to go along with veteran Nick Martin. However, all eyes will be on first-round pick Alex Leatherwood as he is widely expected to man the right tackle spot.

Leatherwood’s selection was surprising given the roster’s needs on the defensive end, but nonetheless are getting a player who excels in the run game. Head coach Jon Gruden praised Leatherwood’s physical traits and noted he is penciled in as a starter along the offensive line.

“He’s a talented player, that’s why we took him. We had him ranked high on our board. We’re glad he fell to us. We were glad he was there for us. Smart guy, very athletic. He has a lot of experience. We’re counting on him being our starting right tackle.”

Leatherwood has the ability to win at the line of scrimmage and move opposing players, which should open up the run game for Josh Jacobs and Kenyan Drake. The Alabama product also has the added benefit of already having played with Jacobs during their time together in college, which should go a long way in his development.

It is always difficult to evaluate players, and while some around the league may have criticized the Leatherwood pick, there is no way of knowing how it will pan out until he hits the field. Nevertheless, Gruden is counting on Leatherwood to anchor the right side of the line, and if he can do so, then the Raiders should be able to control the game on the ground and make life difficult for opposing defenses.