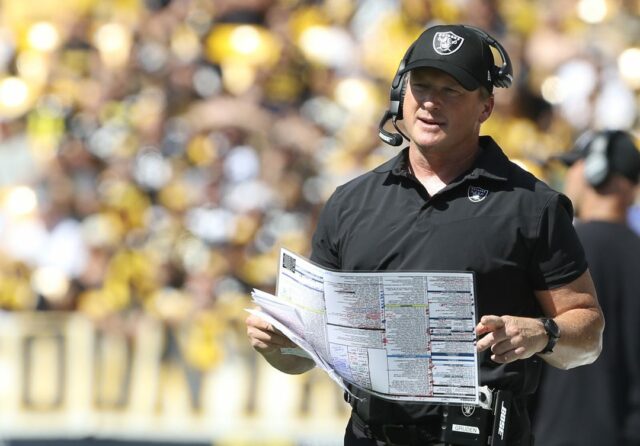 Heading into Week 3 of the 2021 season, the Las Vegas Raiders somehow find themselves at the top of the standings as they have gotten off to an impressive 2-0 start.

Head coach Jon Gruden has got his team playing good football, with the offense continuing to put up points while the defense has managed to slow down opposing squads just enough. In Week 3, they get an interesting matchup against a Miami Dolphins team that is feisty defensively but will be without Tua Tagovailoa, who is dealing with fractured ribs.

During the 2020 season, the Raiders lost to the Dolphins after Ryan Fitzpatrick completed a throw downfield despite getting his face mask pulled. Miami was able to knock down a 44-yard field goal and escaped with a 26-25 victory over Las Vegas. Even though the revenge game narrative is present, Gruden believes the roster churn removes that factor from the matchup.

“We’ve got a lot of guys that weren’t even here, so I can’t really play that card,” Gruden explained. “Guys don’t even know what you’re talking about. I don’t know if it’s revenge. We gave up a Hail Mary and a personal foul facemask on the same play. One of the worst plays that I think the Raiders have had in their history and there’s nothing we can do about that. We just got to hopefully close out games better than we did then.”

It was an unfortunate ending for the Silver and Black, who were well-positioned to win that game before the play unfolded. It was the inflection point of the season for the Raiders because instead of going over .500 at 8-7, they went 7-8 and could not climb back out.

This time around, however, the Raiders are considered the favorite to win because of the Dolphins’ quarterback situation. So, 3-0 is definitely in the cards for Las Vegas, and hopefully, they can keep their momentum going.