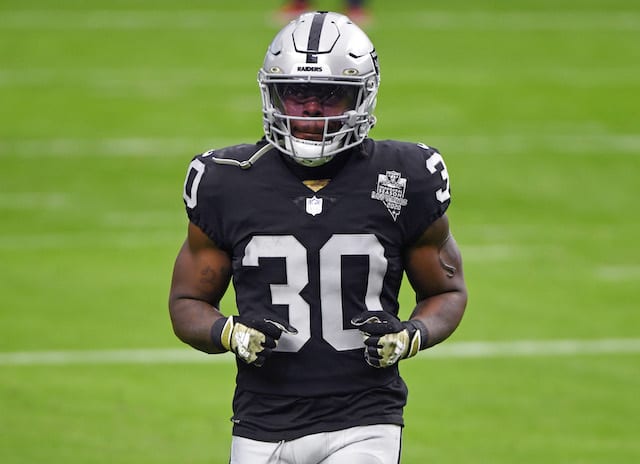 The Las Vegas Raiders managed to take care of business with their lopsided win over the Denver Broncos in Week 10.

The Raiders now find themselves at 6-3 despite struggling to stay healthy up to this point in the 2020 NFL season. Of course, the 37-12 victory against the Broncos did not completely mask the notable voids on the roster.

Running back Jalen Richard was knocked out of the game during a kick return in the first half. Meanwhile, left tackle Kolton Miller and defensive tackle Maurice Hurst are still working their way back after missing the last two games.

According to Vic Tafur of The Athletic, head coach Jon Gruden provided encouraging updates on all three players:

Jalen Richard has a bruised sternum. Kolton Miller and Mo Hurst worked out Monday and Gruden said there were “positive signs.” Their status will be updated later in the week.

With Josh Jacobs maintaining his workhorse role in the backfield, Richard has doubled as both running back and kick returner. Although he took to Twitter to express some optimism in light of the injury, it remains to be seen if he will be available for the AFC West showdown versus the Kansas City Chiefs this weekend.

Las Vegas can at least take solace in the fact that the health of Miller and Hurst appears to be trending upward. They were both sidelined with ankle injuries for the past two games and their return should provide a much-needed boost in the trenches.

Gruden is also optimistic that fullback Alec Ingold continues to progress after playing 12 snaps with a fractured rib he suffered the week before. It is safe to say that the timing could not be any better for Las Vegas with their division rivals coming to town to redeem their loss from Week 5.

The Raiders have navigated through difficult circumstances to put themselves within striking distance of the Chiefs. Having their personnel closer to full strength should help pay some dividends heading into the final stretch of the season.