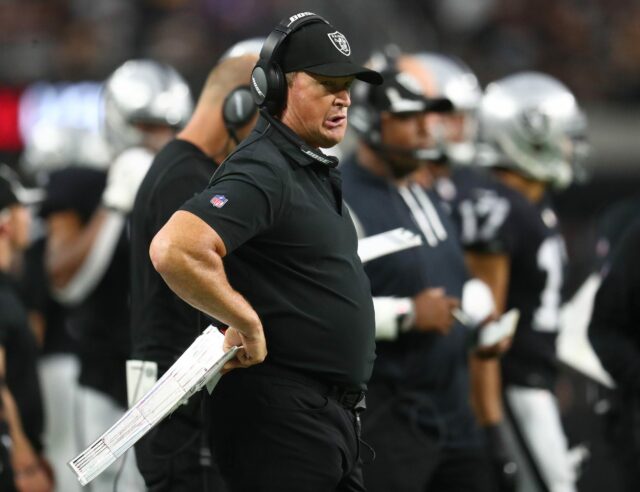 The most curious move of the offseason for the Las Vegas Raiders was the overhaul of their offensive line which was considered one of their major strengths.

The Raiders let go of several key pieces of the 0-line, including trading away Rodney Hudson who is widely regarded as one of the best centers in the NFL. In their stead, Las Vegas is relying on young and unproven players and so far the results have been uneven.

In the team’s loss to the Los Angeles Chargers, the offensive line was clearly outplayed by the Charger defensive line. Derek Carr was sacked four times and the ground game found little room to operate, making it tough to score during the night. Despite their struggles, head coach Jon Gruden is not panicking quite yet via Levi Edwards of Raiders:

“We like our linemen. We really do,” Gruden said Tuesday, via the team’s website. “We did have some pretty good outings. We are not going to hit the panic button. We got to keep coaching. We got to keep developing these guys and sometimes, the medicine is what we all need. We all need a taste of that medicine even though we don’t like the taste.

“You got to get back to work, you got to get back on the horse. That horse will throw you off once in awhile and if you know anything about [Joey] Bosa and some of these guys in this league, they are pretty good at throwing you off your horse. So, you got to be mentally tough and keep fighting.”

It is admirable of Gruden to go to bat for his linemen, but it is still going to be an issue to monitor throughout the season as the Raiders have gotten off to slow starts in nearly every game so far. However, he is right in that growing and developing the line will take some time which leaves some optimism that they will turn things around as the season year progresses.