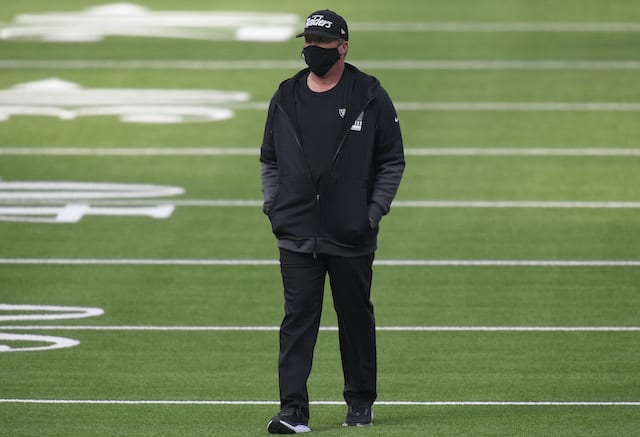 Shortly following the breaking news story, Gruden resigned as the coach of the Raiders, likely knowing that his termination from the position was coming anyways. Gruden has been a staple of the NFL for the last two decades, but the hurtful and offensive nature of his emails left him — and the Raiders — with no other choice.

Gruden released a statement apologizing to everyone within the Raiders organization. “I have resigned as Head Coach of the Las Vegas Raiders. I love the Raiders and do not want to be a distraction. Thank you to all the players, coaches, staff, and fans of Raider Nation. I’m sorry, I never meant to hurt anyone.”

Raiders owner Mark Davis released a much simpler statement. “I have accepted Jon Gruden’s resignation as Head Coach of the Las Vegas Raiders.”

Regardless of whether or not Gruden’s apology is sincere, this was the only course of action for a coach who absolutely would have lost the respect of his locker room if he stayed.

Gruden’s emails were harmful in many ways, but they were especially homophobic, which is even worse of an issue considering the Raiders are home to the only openly gay player in the NFL, Carl Nassib. So his stepping down or being fired was the only option.

Now, the Raiders are left scrambling and trying to piece together a salvageable season. At 3-2, the Raiders still have a chance to put themselves in the playoff picture, but they’ll have to do so with an interim head coach and an already inconsistent roster.

Special teams coordinator and assistant coach Rich Bisaccia will take over as the interim head coach for the remainder of the season.

The Raiders will have a great opportunity to get their season back on track as they face the reeling Denver Broncos. These AFC West rivals started 3-0 before dropping two consecutive games, and they now meet in a Denver for a potential must-win matchup.