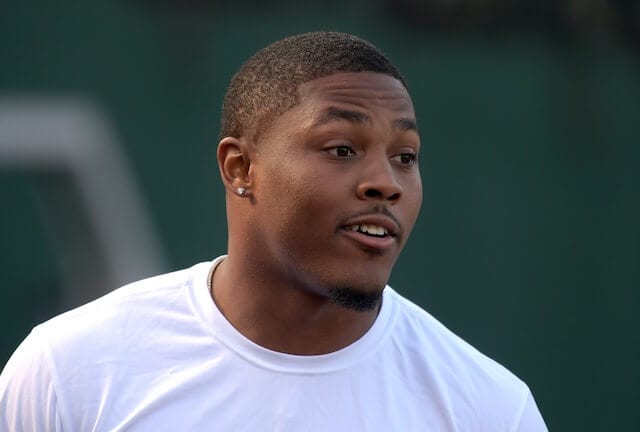 While the 2020 season didn’t go as planned for the Las Vegas Raiders, finishing 8-8 and missing the postseason, there were some bright spots for the organization.

One of those was the production of second-year running back Josh Jacobs, who is developing into one of the bright, young stars on the team.

In 15 games, Jacobs rushed for 1,065 yards and 12 touchdowns, also adding 33 receptions for 238 yards, being named to the Pro Bowl for the first time.

Unfortunately, Jacobs’ season didn’t end how he wanted it to as just hours after rushing for 89 yards and two touchdowns, including the game-winner, in the Raiders’ season finale, he was arrested on DUI charges, per Kevin Bolinger of Fox:

According to police, the accident took place at 4:42 AM and police suspected impairment. Jacobs was taken to a local hospital to be checked out. He has been released from custody and has a court appearance set for March 8th.

It is good that Jacobs was released from the hospital and doesn’t appear to have any serious injuries. Getting arrested on DUI charges is never a good look though, especially for a player who is one of the faces of the Raiders’ franchise.

According to Vincent Bonsignore of the Las Vegas Review-Journal, Jacobs’ lawyer believes there was no wrongdoing:

From lawyers of @Raiders RB Josh Jacobs after reports of DUI arrest:
“No complaint has been filed against our client and there are no blood test results to support a suggestion of impairment. We intend to enter a not guilty plea on behalf of Mr. Jacobs if he is ever charged.”

The Raiders then released the following statement:

From @Raiders: “The Raiders are aware of the situation involving Josh Jacobs. The organization takes these matters seriously and we have no further comment at this time.”

Considering the season is over, Jacobs won’t face any discipline from the league until after he goes to court in March. If what his lawyer is saying is true though then there likely wouldn’t be any suspension or fine.

Regardless of what actually happened, this is not a good look for Jacobs, so hopefully he can learn from this experience to avoid another incident in the future.